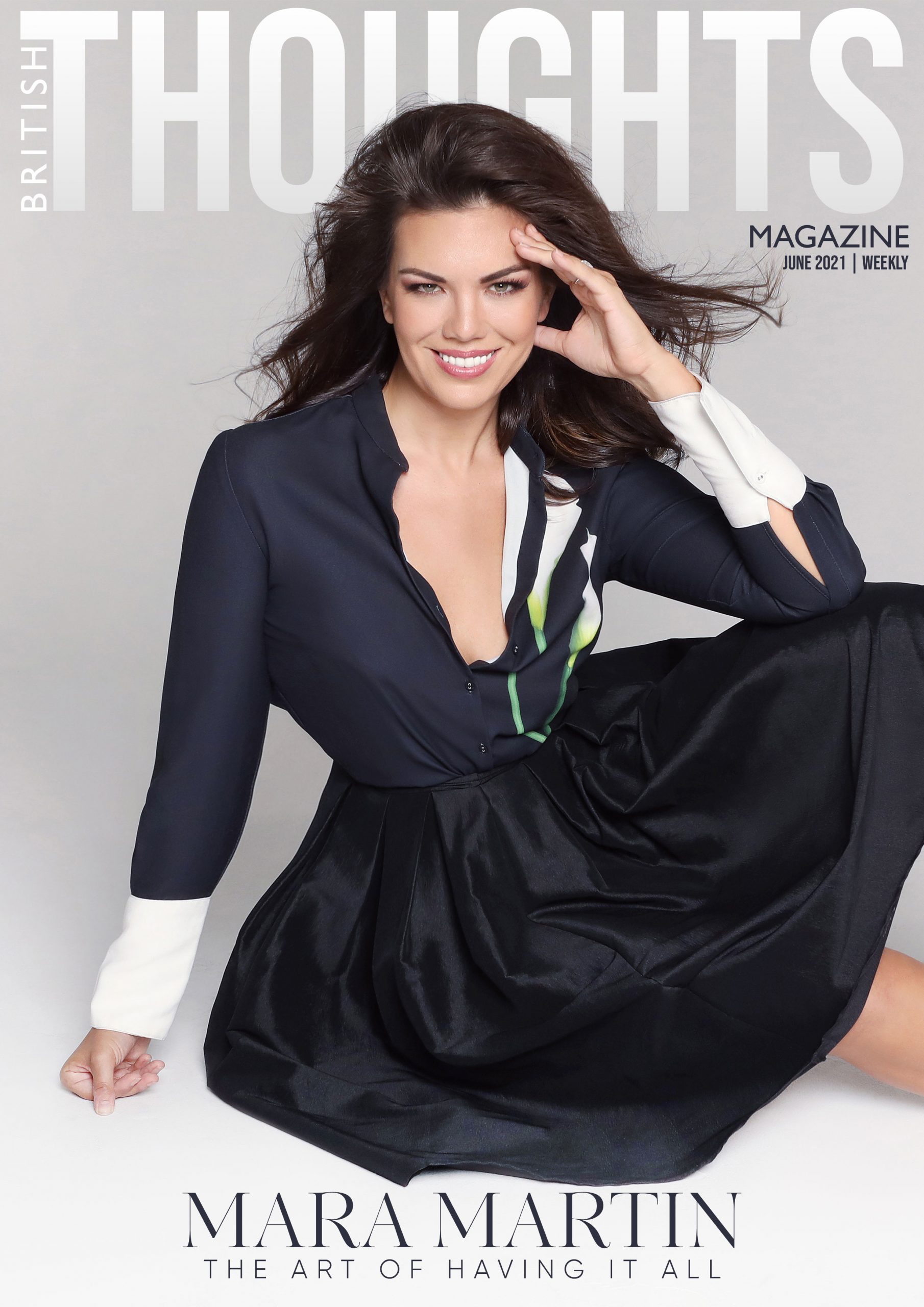 Mara Martin’s rise to success has been on a meteoric high, has made international headlines as the “Model Mum” of Sports Illustrated after walking the runway while breastfeeding her then five-month-old daughter Aria. She shows no signs of stopping, since then her platform has entered on normalising the concept of “working” mums in the Fashion Industry, joining the likes of Heidi Klum, Coco Rocha, and Kate Moss, as one of the high-standard career women of all time and destigmatizing breastfeeding in public.

Recently, she’s been on the covers of many fashion magazines and working with brands such as Adidas and Rebecca Minkoff. Mara’s stint as a model is constantly evolving and in line with her role as a motherhood advocate, always speaking candidly about her experiences in the fashion industry which earned her recognition as one of the Top 100 Changemakers of the world and making the list of Mothers of influence.
In this day and age, Mara is proving that she is more than a supermodel and mum, she is working to be a master of herself, constantly working to improve and being open to whatever opportunity life throws in her direction.

Here at British Thoughts Magazine, we catch up with the enigmatic Mara Martin as she sits down with Sir Kamil Lemie for a rare and in-depth interview as we get her thoughts on life, motherhood, and her future.

K.L: To start, you’ve done a lot of amazing outputs, commercial videos, and shoots. How many in total?

M: It’s crazy because people always see that they have a dream job. And I wanted to do this my entire life. And so after college, that pushed me to make the big move. So I moved to LA, Miami, and lived in New York. I just fell in love with everything about it: the people, traveling around, it’s been exciting. It’s just one of those jobs that you do something different with. Whether it’s a photoshoot location or interviews like this, it’s really fun for me. So it’s kind of just all of it which I love.

K.L: In the fashion industry, traveling is always one of the main perks and requirements but for you, if you were given the chance to go to an ultimate paradise destination to unwind, where would it be and why?

M: I mean, I can Netflix and chill, watch TV for hours on end. But I do like to keep busy and being productive. While we do live in Miami and it’s tropical, it’s fun to just take a boat out right away to the Bahamas or anywhere in the Caribbean. So that’s always fun. But I’m also like a homebody at heart. I have family in Michigan and Canada. If there wasn’t a pandemic, we would spend time there.

K.L: When did you start modeling and what was your first experience like?

M: Oh my gosh, I want to think it was when I was an extra and a TV Show. For me, I thought it was the coolest thing ever and you know you’re there all day on set. But it was my first glimpse of big cameras and these production people. So that was my first gig. But then after that, I consistently started booking more.

K.L: Do you remember how old you were back then?

M: Yeah, I was twenty-three, fresh out of college. I moved right to LA and it was a good big culture shock because I came from a very small town with two stoplights. So I went to LA and I was like ‘Oh my gosh, this is amazing, it’s a dream’.

KL: What’s the difference between living in a small town and a big city?

M: I mean, it’s just, it’s still crazy. When I do jobs, I’m like ‘Oh my God, how did I get here?’ kind of thing. But um, yeah, it’s drastically different from where I’m from, everyone knows each other and their business. Now, I’m in Miami and travel between LA and New York. It’s glamorous, it’s definitely what you see in the movies. It’s good to still keep your head down, stay true to yourself, and your morals.

K.L: I’ve introduced you as a mother, model, game-changer, and advocate. This all came about during your role as a model – how much do you think things have changed since then?

M: Yeah, I mean, it’s so crazy, the fashion industry has changed so much since my 20’s. There was a standard that was set that you had to be younger and skinnier. But nowadays, it’s fortunate you know, as I get into my 30s, the industry has become more accepting of mothers, minorities, and different body types. With Sports Illustrated it gave me that big break I was working incredibly hard for and funnily enough, it wasn’t planned – but it purely happened by chance and I got to spend it with my little one.

K.L: It’s great to know that you have a wonderful support system, now with your career going to new heights with all of these wonderful covers, where else are we going to see you?

M: I’m hoping to keep this wave going because I want to keep things moving, at the moment, I’m at the tail-ends of finishing this book I’m writing, creating a make-up line for kids, and a mommy and me clothing range. So maybe you guys will be seeing my face around more.

K.L: One of your advocacies in life is destigmatizing breastfeeding, which is amazing. It’s particularly interesting to me since one of my degrees is being a midwife. But as you know, I’m also an actor and producer. Could you tell our audience how this all started?

M: Aria was five months old at the time and now that I’m thinking about it, it was a crazy experience. I didn’t have a babysitter back then. So I just brought her with me to the casting and when I made it to the final call with all sixteen girls, MJ, the editor asked me if I wanted to walk the runway with my baby girl and feature her in one of my looks. When the show was starting, Aria got hungry and obviously, I didn’t know what to do, so I asked MJ and she said ‘go walk, she’s your baby’, so I did it with her support. Because I’m sure as you know, being a midwife, that it’s crazy.
So the act of breastfeeding didn’t seem monumental because I did it so much every day for five months. I was doing it all the time. So I went out there then came back to put her to sleep and change into a new look.
The next day it was kind of this whirlwind of support with young women and mothers and it was pretty much all around the world. Everyone loved it. So to see it resonates with so many people and it was such a powerful moment, you feel the impact of it today.
I see brands like Adidas, Rebecca Minkoff, and the swimwear line. They’re showing breastfeeding women, mothers, postpartum, and celebrating our bodies. And I think it’s such an important conversation to have, I’m just glad I got the ball rolling a bit.

K.L: Could we say that you ignited a new wave into the culture of feminism and motherhood?

M: I don’t think I started anything too crazy but again, I’m going to say this: It’s hard to be a mum, especially when you have a career but being a mother is a constant 24/7 job. It never stops and even if they’re down for a nap, you’re still worried about what they want to eat and need.

K.L: How do you still keep fit nowadays?

M: In my twenties, I was very focused on my body in an almost unhealthy way. But ever since I had Aria, I’ve kind of been celebrating what my body can do instead of focusing on just what it looks like. And for me, I kind of just do what feels good. Chasing her around is enough for me as a workout because she’s so active.

K.L That’s so cool. And probably I know the answer, but please tell us what is your priority in your life?

M: My number one priority will always be Aria, everything I do is for her, and I want her to understand that she can do anything she wants when she’s grown up.

K.L: Being a fashion model is a lot of hard work although a lot of people don’t know how hard the job is and the mental toll. How did you deal with it? and what are the common misconceptions people have about the industry?

M: Rejection is a big factor in this industry, like any other, and when I was younger the pressure used to get to me sometimes, but now that I’m older I realize that when another door closes, another opportunity pops up and in this industry being confident with a thicker skin is a must.
As for the common misconceptions that people have about the industry, one of them is that if you’re a model, people just take you for how you look, especially since we’re talking about pictures. No one thinks that these people would have substance or a multi-faceted personality, that’s what’s unfortunate about it.

K.L: With all of these things going on, how are you still able to make time for yourself?

M: I’m the worst person to ask this because I don’t make time for myself. I’m not the type to go and get my nails and hair done. For me, I’d rather do something chill, but obviously with the pandemic, I realize that I do need to spend some me-time even if it’s just going for a solo walk or taking a cat nap to recharge my energy.

K.L: In this day and age, focus and concentration are the most effective aspects when it comes to achieving a healthy and positive outlook. Do you have any tips that can help to keep you in line with your goals and affirmations?

M: Staying focused on your goals is something to keep in mind, although there are so many distractions like social media and Netflix. If you want to achieve your goals you have to turn those dreams into a reality.

KL: Do you think the modelling industry is finally becoming diverse after all these years?

M: Absolutely, I do think that the modeling industry is finally becoming diverse. You can see a lot of brands opening up their standards more, although there’s no denying that there are some brands that jump on the trend of saying they’re inclusive or saying that they’re diverse but it doesn’t reflect. But I have seen a major shift in the last couple of years with showing more body types in different skin tones. And I think that is so important. Because everyone wants to be represented and there shouldn’t be a certain standard for it.

K.L: And if you were to hand out two pairs of wisdom for bright young newcomers hoping to shine in the industry, what it would be, and would you ever set up a modeling camp or agency like Coco Rocha’s Modeling Camp for example or Kate Moss’ agency?

M: Never take no for an answer! you are going to go through a lot of no’s and rejection but you can’t let that get to you. If I gave up after the first no, I wouldn’t be here now. As far as setting up an agency or a modeling camp, that would be a good idea. I think it’s amazing when people set their eyes on a certain goal and making it happen, especially empowering others and mentoring them in the how-tos of the industry.