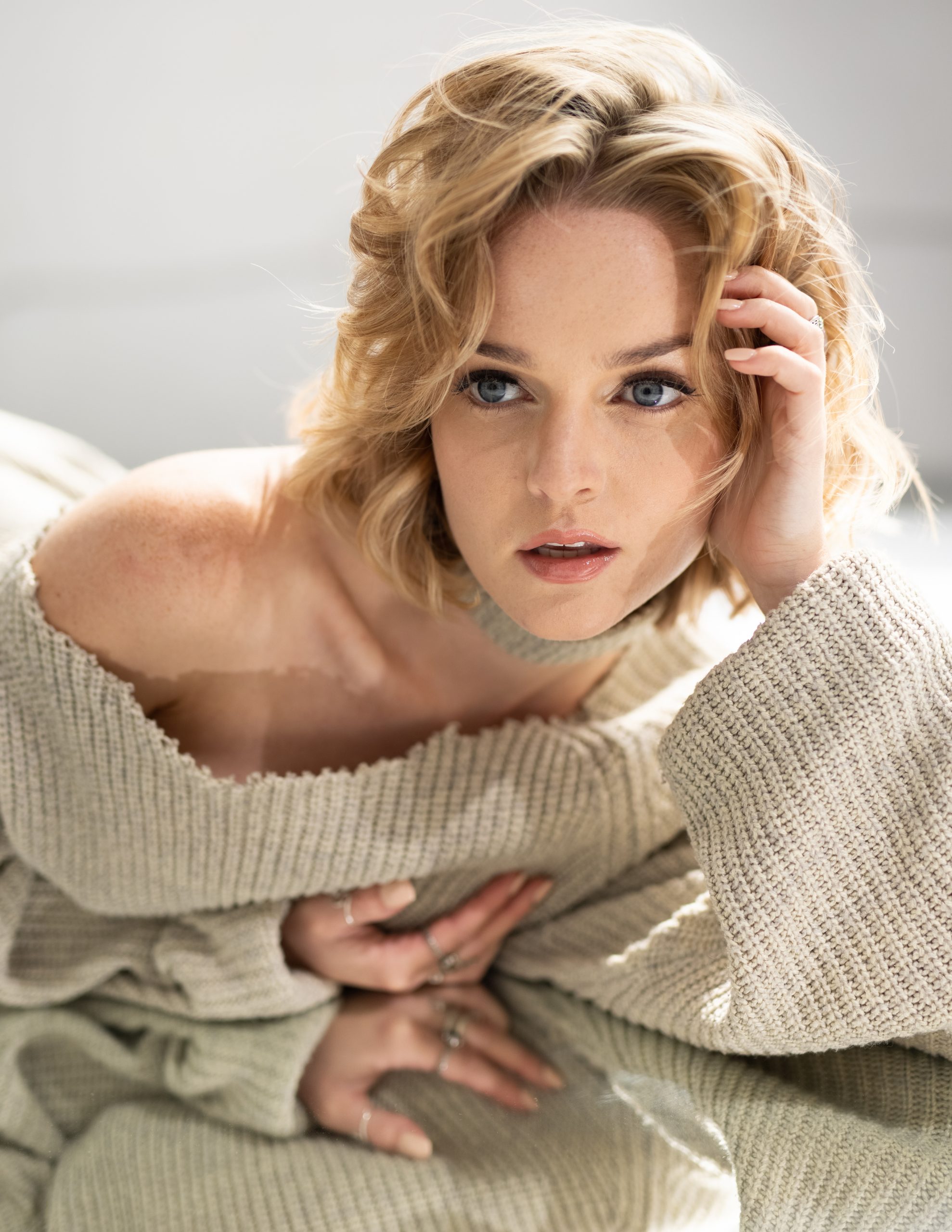 Netflix’s adaptation of dark fantasy  Locke & Key has been breaking viewing rates internationally and it’s no wonder that its youthful cast members are getting Hollywood’s attention. Based off on Joe Hill’s award-winning comic book of the same name. With its second season underway, one of the cast’s break-out stars, Hallea Jones shines in her role as Eden Hawkins, as one of the main antagonists– is the quick-witted, confident and outspoken Queen Bee of the town.

Season One leaves off with a cliffhanger centring around Eden who has been infected by the material from behind the Black Door possessing her with a demon and turning her evil.

As the youngest in a family of artists, Hallea began performing in school plays. This later led to her signing up with Robyn Friedman and began working in film and television which later led to her starring in Workin’ Moms.

Here at British Thoughts, we sit down with the beautiful Hallea as we ask her about her role and what are her plans for the future.

First of all, what was your beginning of choosing this artistic path? I know you come from a family of performers and musicians.

Hallea Jones: I have always been a performer since I was a kid: I participated in various school shows or different kinds of plays. Unfortunately, in high school, I did not do that much. I was mostly focusing on studying and on things outside this artistic path. At first, it made me discouraged, but later I got back to that when the show called DeGrassi: Next Class did the open call at my school. And I got in! It was also the time when I decided not to go to university. It was the film and music world that I wanted to be in, not the academic one. 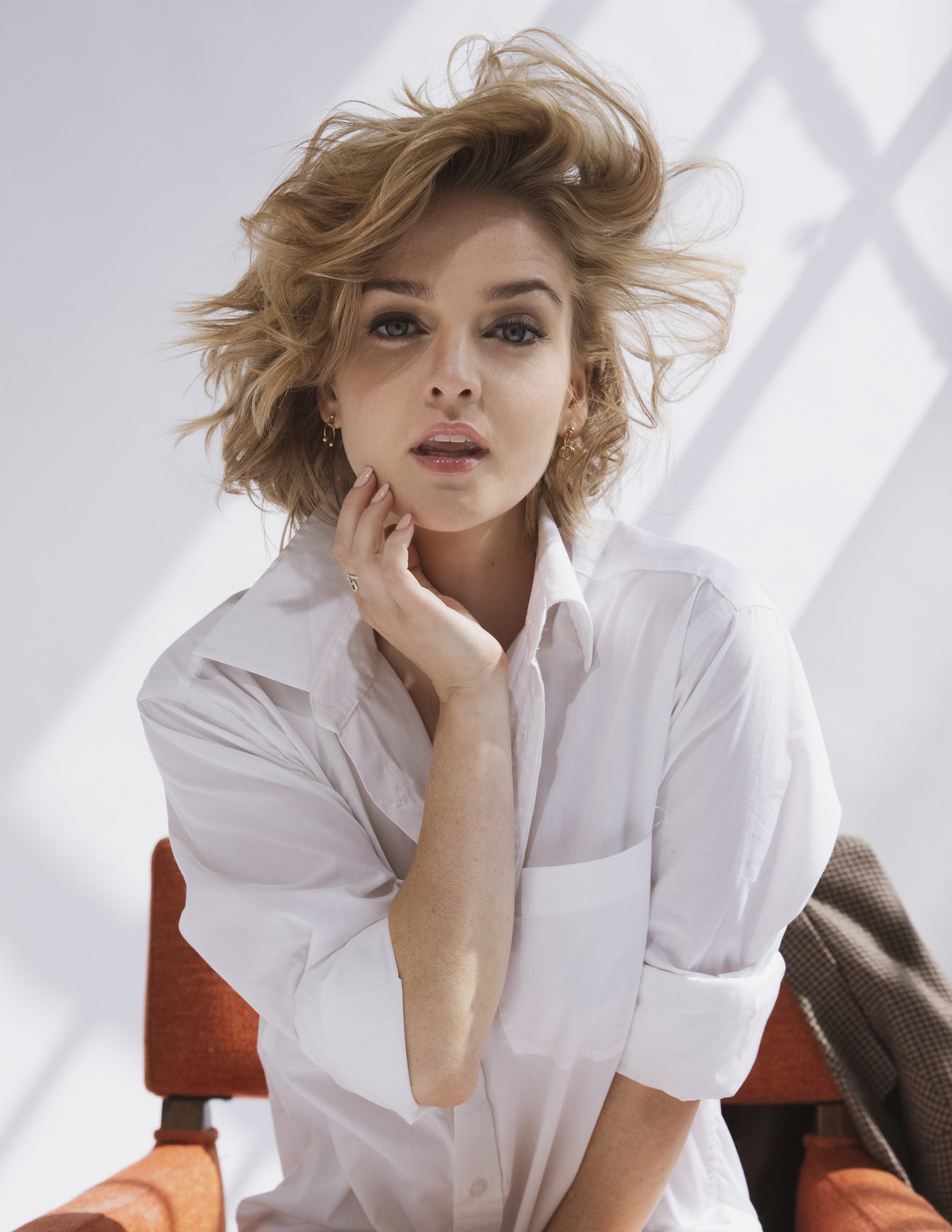 Did your family encourage you to take the path of the actress?

They were really supportive. Parents would prefer their children to be in college studying medicine, but they always knew that I did not enjoy school at all. They probably said something like “sweet, at least you will save your money on the university tuition”. In the end, I put that “tuition” into my acting. And it was worth it.

How did the casting for Locke & Key look? Was there anything resembling, like, different from other events you have participated in before?

When I did the audition, I messed up my lines! I was more than sure that I was not going to get this role. As you are aware, I got the job, and I was later told that the reason I was in the series was that I made them laugh during my audition. It was resembling for me because, mostly, I took part in auditions for a stereotypical popular girl in high school. And Locke & Key was really something new! Eden was different, and I could bring some new elements for her character – and I didn’t do it before! What is funny, is that she was never supposed to be the person she becomes at the end of the first season. The reason why it happens is probably her humorous personality. Everyone liked her, and she got the attention of both the producers and the first viewers of the show.

Interestingly, I was told that maybe I will get something like six episodes. I ended up being in eight, and, what is more, I became the main villain of the second season. So I was more than lucky! I started being on set mostly every day, I worked with special people and had so much fun. And my Eden changed – like a lot! However, I can’t tell you what exactly happened to her at the end of season 2 (as it would be a spoiler). You have to wait! 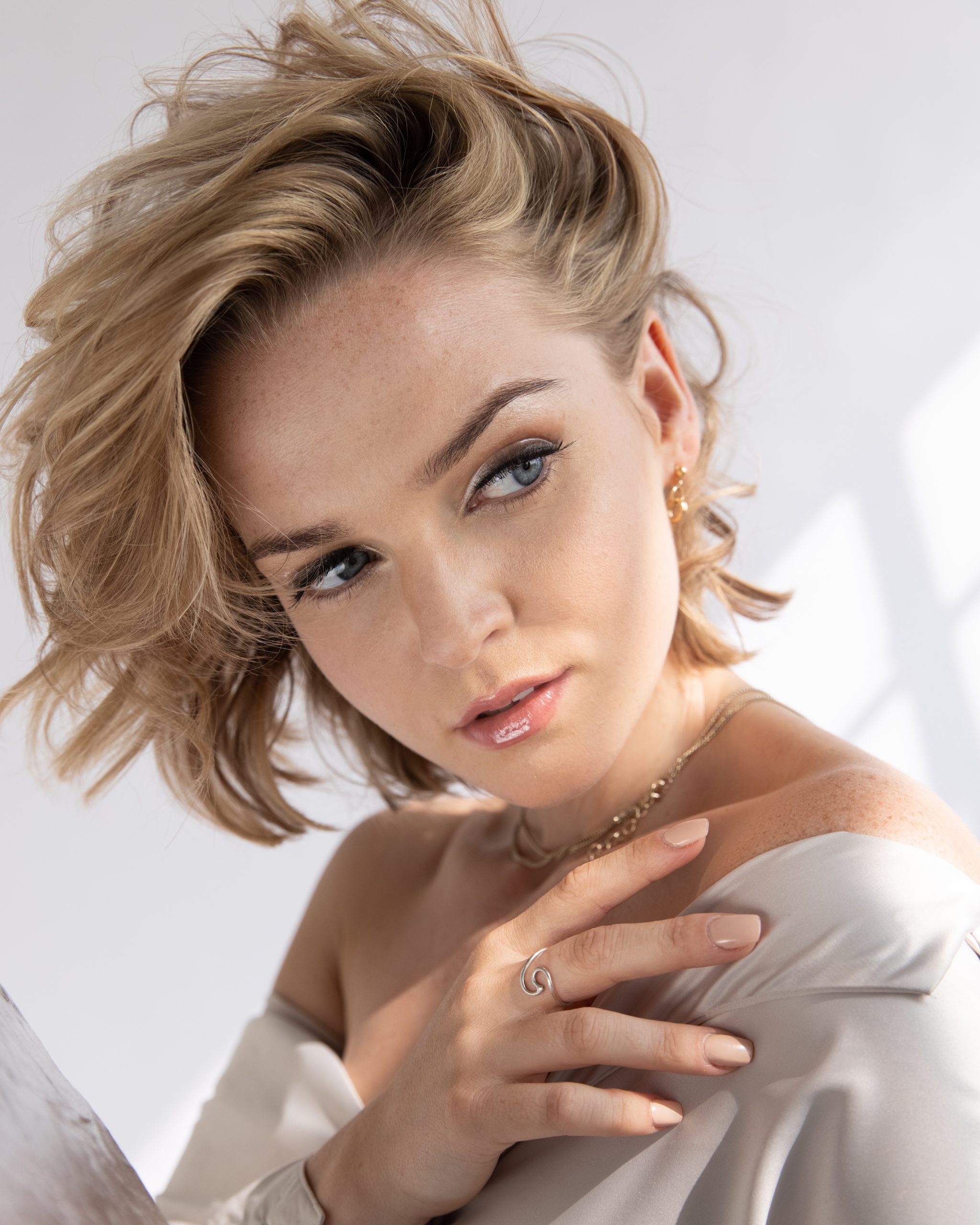 In your words, how would you describe a new version of Eden Hawkins in season two?

She is more unhinged, chaotic and crazy. She was already not a nice person in the first season. As a direct consequence, in the second season, we somehow expanded some of her facets. Scriptwriters focused on her relationship with her mother, on how she was brought up in a toxic household. It was all chaos, and the second season was leaning into that.

You stated that you tried to draw inspiration from such characters as Regina George from Mean Girls or Jennifer from Jennifer’s Body.

Regina George is an iconic popular girl from high school who speaks her mind and do not treat people nicely. Like at all. And I also like Megan Fox’s character, Jennifer, because she has this dualistic personality, there is a lot of contrast in her. Eden is very much like her: she is manipulative with her sex appeal, and she gets what she wants, she always goes for it. It’s pretty inspiring. 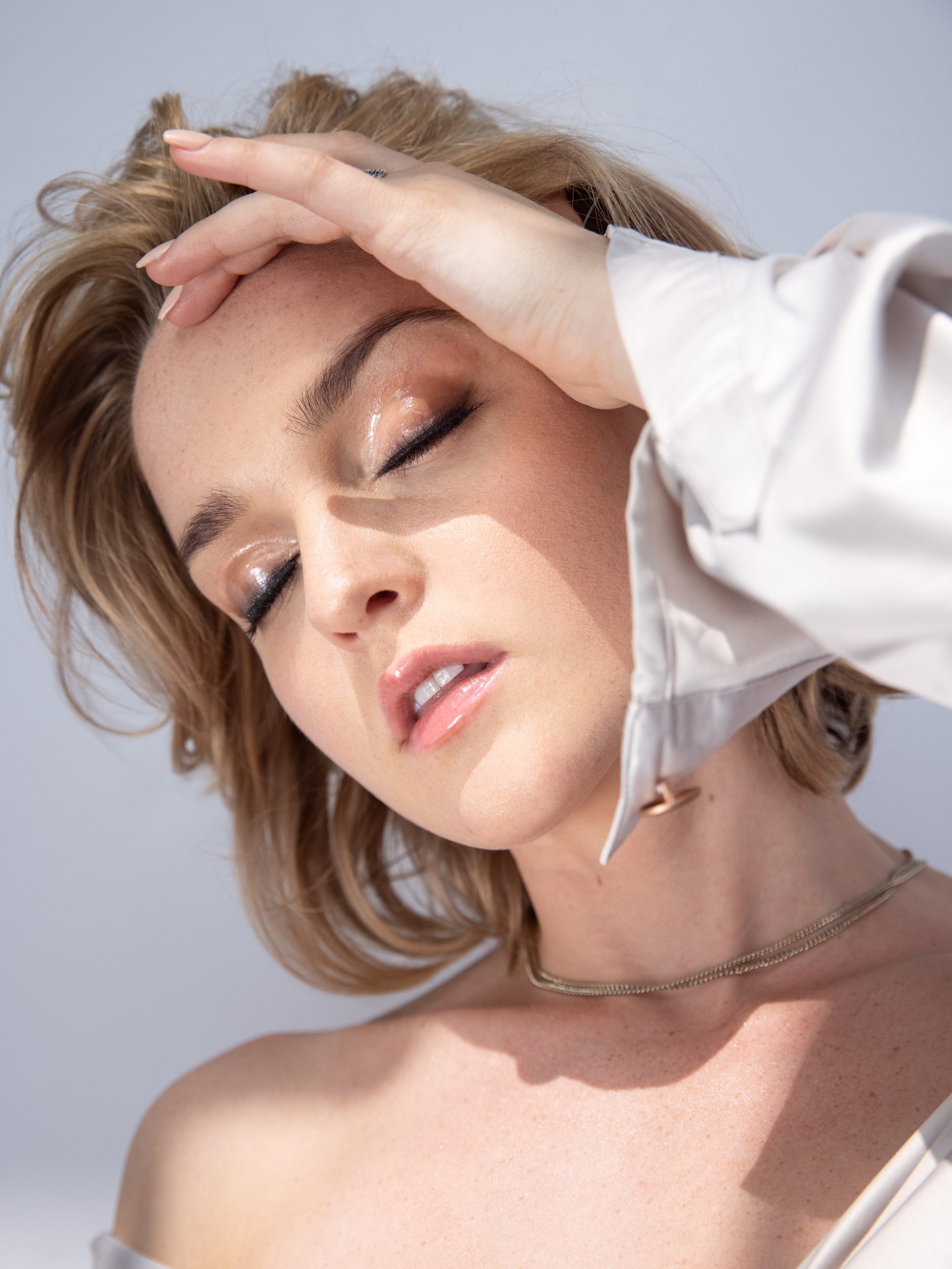 Have you read the original comics created by Joe Hill? How did you manage with the fact that Eden is not in them?

Yes, I read them. I actually love the fact that Eden Hawkins is not originally in them! People always have expectations towards the characters that already appear in books/comics. I was able to play with her more, I had this ground on which I could do whatever I wanted. And no one had any expectations towards me. Thanks to that, I had no pressure.

So it was easier to create your own heroines from scratch?

You don’t have this mould that you have to fit into. What was written in the script was enough for me to find my own Eden and to gradually explore her on my own rules. It is easier for me than trying to fit into the appearance expectations of producers or biggest fans of the comic book. I also talked to Meredith, our showrunner, when I had some questions or personal ideas like changing the lines. Nevertheless, I was in no position of changing her persona. But she was very helpful after all, we made some things differently!

Can we interpret your Eden as an attempt to create a more independent, feministic persona? I am aware that she is corrupted by the demon, but still, we rarely see such cunning women characters in modern cinema.

I hope it is the beginning of a bigger change! For so long women have been put in this place where they played the side piece of a hot girl or not an interesting girlfriend. It’s great to see the industry changing in ways that it is allowing women to have more amusing characters. And, what is more, they can deeply explore them! In cinema, there were a lot of times that women characters had so much potential and producers did nothing with these opportunities! I hope to play such strong, resilient, powerful and independent characters in the future. It is just the beginning of that change, there is still a lot to be done, and I am excited to see how cinema will change in the following years. 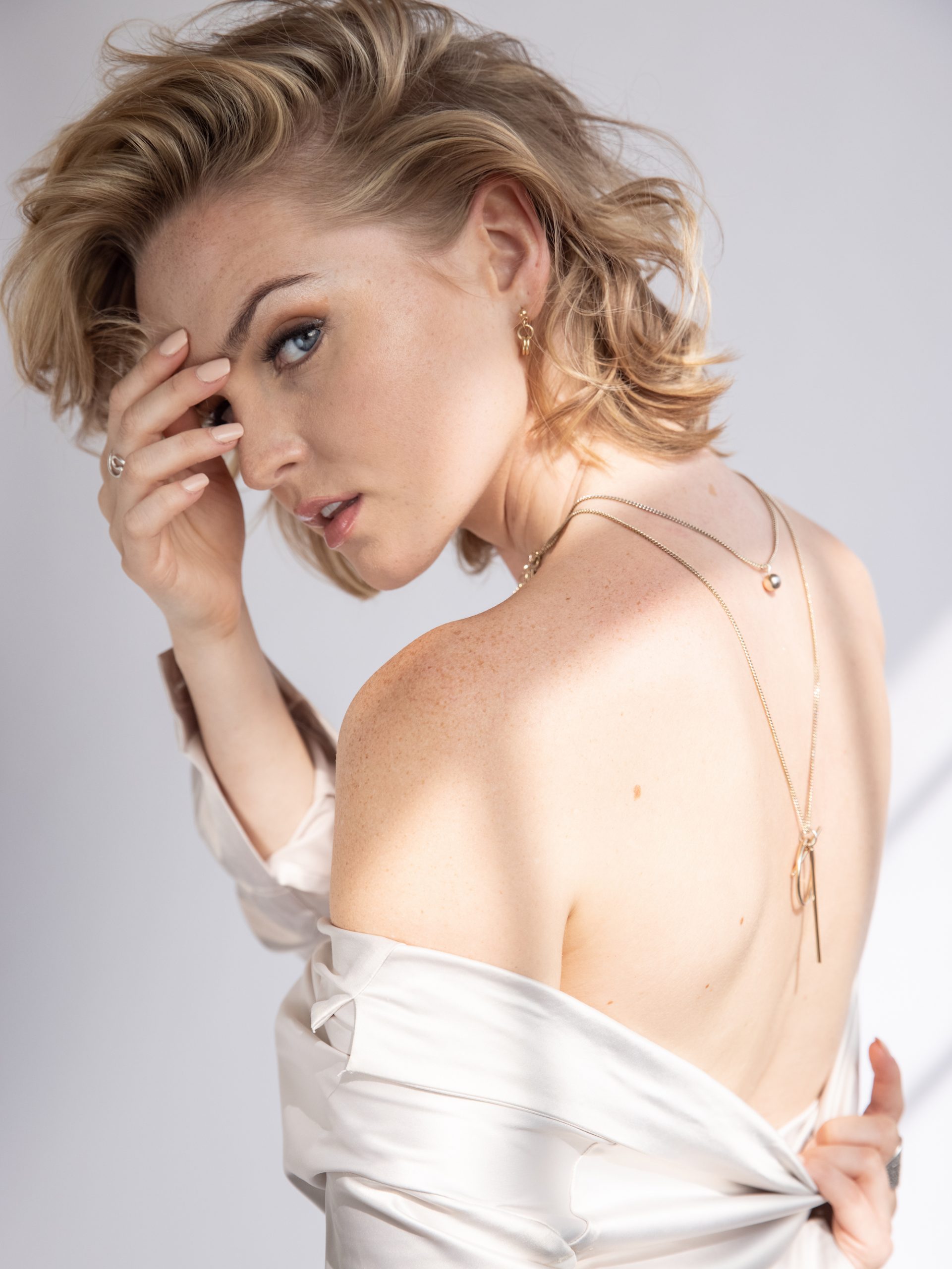 What are some of the traits that Eden has that you could relate to?

If I would say yes, then people will worry about me! In certain ways yes, when I was in school, I always struggled to fit into our small society. I had to act out to be liked, so I was probably just like Eden these times. That was a hard time in my life, and I know that I am not there anymore, but I still go back to my adolescence when I think about Eden Hawkins. I always tried to link Eden’s experience with my own high school stories. Ultimately, I have a lot in common with her, but now with this diabolical side of her from the second season!

Also, I wanted to ask you about your activity on social media. Recently, on your Instagram story, you were fighting with an awful comment related to toxic masculinity. Would you like to say something more about this situation?

I always try to use a lot of humour on my social media, and this is 50% of my Instagram profile. The other 50% is my work. So the guy from the comment, who have watched the show, has reflected on Eden’s attractiveness in the show. So he followed me on Instagram and commented on a picture of me, and a plant. And he wrote that “it is not what he came for”. He unfollowed and left. So what I did is that I posted the photos from my old photoshoot where I am in a bathing suit, which I thought will be funny. And that guy just “missed it”. I believe in owning my own body and posting whatever I want. I just want to share who I am, I don’t want to be judged because of my physical attractiveness.

I am working on a lot of music, it is mainly my project for 2022. In terms of the acting, I still don’t know what am I going to do. Music is my main focus for now.