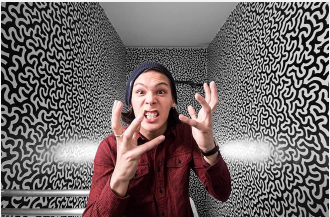 From living in a small quiet town in the Philippines to working with Cartoon Network and solo exhibitions in Tokyo, artist Ian Anderson tells us about his artistic journey and the importance of returning home. His latest exhibition in San Juan, Manila, Philippines took place at the Secret Fresh Gallery where he displayed works of his signature pen and ink technique.

Ian Anderson is a Filipino artist, born in a provincial part of the Philippines. His work specialises in “micro art” and patterns created using a pen technique which became his signature style. He taught animation and video game design for five years at a digital arts school in California for autistic young adults. His first solo exhibition was commissioned by Cartoon Network which discovered Ian during his teaching career in California.

When did you begin your artistic journey? Has art always been a part of your life or was there a particular moment when you discovered your passion for it?

I grew up in Antipolo, a small provincial town outside of Metro Manila and went to the Waldorf school. That school shaped me a lot I think during my formative years. They were big on play and creative learning (I think my worst grade was in jump rope)— I also remember they were very adamant that we couldn’t play video games during the weekdays which was heartbreaking to me then, but in its place I decided to make my own “games.” Mazes, look & finds, and visual puzzles and things of that nature. I’d say the DNA of my work was formed then.

Your work is described as abstract art, are there other mediums of art you have explored?

I taught traditional animation for several years and pursued some of my own projects and video games back when Flash and Actionscript 2.0 were still a thing. I disliked those mediums because at the time I felt it forced me to prescribe a personality to my characters when in reality I just wanted my characters to exist as statically and neutrally as possible for the viewer to bring their own life to it.

At one point I even animated my characters, lip-synced their voices, watched them move and interact etc and it didn’t feel right.

Your first exhibition was commissioned by Cartoon Network, have you drawn inspiration from their animations and graphics?

How on earth was Courage The Cowardly Dog a kids show?? Yes, I was a huge fan of Cartoon Network, growing up in the ’90s. I used to teach at a vocational school in Los Angeles that trained people on the autism spectrum to be certified by Adobe. Occasionally, media network executives would come to scout new talent. When the execs came in from Cartoon Network, I felt I had to show them my work. One of the execs commissioned me to make a maze, he showed the other exec who then had me do the same motif on their stairwell, then their friends would want to buy one.. it was a chain reaction.

Were you influenced by any other artists during your career? What was most inspirational about their works for you?
Most certainly. Cy Twombly and Paul Klee are big ones for me. My work is so calculated and controlled, I just can’t wrap my head around how Twombly can make those childlike free form paintings. The sheer scale, colour and energy in his works are as peaceful as they are intense. And Paul Klee had published his sketchbooks, Pedagogical sketchbook. I love how he observes art and analyzes it in an almost scientific way. James Paterson of press tube is another big one.

Your last exhibition was in San Juan at Secret Fresh Gallery and it was called “There’s No Place Like Home.” What is the deeper meaning of this title? Does art feel like home to you?

I come up with my titles after I finish the work, words just come up, and “There’s No Place Like Home” felt right.

Living in a more provincial and quiet part of the Philippines, I would travel to the city and have many sleepless nights out.. yearnings to live in the city. I eventually came to the realization (especially during the pandemic) that there really is no place like home. The solitude and quiet, the very thing I was running away from were exactly what I needed all along.

In a very literal sense, it’s a reference of course to The Wizard of Oz.

In the short footage of your work process shot by Tarzeer Pictures, there is a sense of tranquillity and calmness during the creation of your drawings. Would you say that this describes the reality of the process?

Very. I have many sketchbooks that are chronologically dated. One book is just thousands of individual cartoon characters I’ve created. Another book is words I collect, like ‘mangy mutt’ or ‘perpetual mope’ (and I have thousands of these), I find these during conversations I have with people, media I consume, etc. These make up the visual language of my work. Then I can play around with these images, motifs, and words to create something new entirely. I used to thrive in chaos, but the older I get I much prefer routine and order.

What is the purpose of art for you? What does it bring for you and the world?

I think great art can reveal untold truths in our society. I’ve heard people compare the art world to a sort of intellectual priesthood. But it’s the opposite— when you experience something profoundly beautiful, it takes your breath away and you STOP thinking.

In my own personal works, I want to create works that are fun, engaging, and playful. The viewer can read into it what resonates with them—

Are there more planned exhibitions in the near future? Where would like to take your art from here?

I’m currently working on my next solo exhibition which will be in Leon Gallery International in Manila.