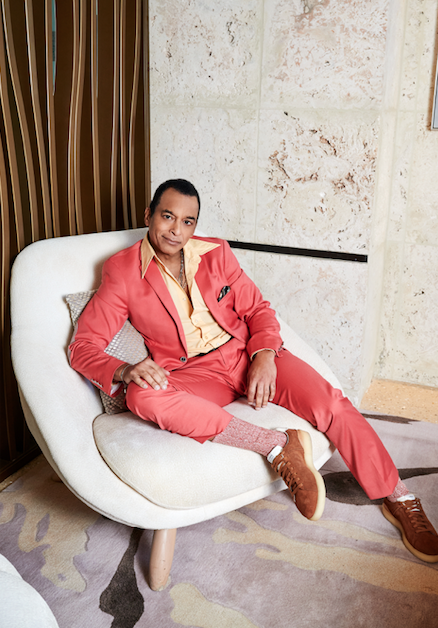 Music icon Jon Secada is celebrating thirty successful years in the entertainment industry. Secada has worked alongside notable artists such as Jennifer Lopez, Gloria Estefan, and Ricky Martin. He has sold over 20 Million records and has garnered major success as a bilingual artist internationally.

A highly esteemed singer and songwriter, he has co-written and co-produced songs for Mandy Moore, and even collaborated on the beloved Pocahontas soundtrack. Jon’s gifts and talents continue to be felt internationally today, as his music remains timeless.

You’ve achieved such impeccable accomplishments! Congratulations! When you hear the title “3X Grammy Award-Winning Singer and Songwriter” associated with your name, what emotions are evoked?

“When I come to terms with the fact that I’ve gotten three grammy’s, more than anything else, I’m humbled by the accomplishment. The fact that colleagues, and peers of mine in the music industry,  after thirty years, started with my very first Grammy award, and a couple of years later got the second one, and the one that we recently got maybe a few years ago.

How do you feel you’ve impacted the entertainment industry thus far?

“It’s always a difficult thing for me to think about how have I impacted the music industry. I don’t think of my career in that way, I feel very fortunate, and in the early nineties, I was a part of the beginning wave of a group of artists that were actively Hispanic artists, Latino artists, actively doing the crossover. Before I did it, obviously there were other pioneers and other people that have been doing it already for two or three decades before the nineties.

But the 90s marked a new era for Latin artists and I feel very lucky. That I was a part of the beginning set of waves of artists of Latino artists that we’re recording in English and Spanish. And that brought about I think in that decade, the beginning of crossover careers for Mark Anthony, Shakira, Jennifer Lopez, Enrique Iglesias, Ricky Martin among others, so. It was a very, very special time.”

Who, if anyone, were you most influenced by musically during your childhood?

“My childhood, I think from the beginning was always geared to music, I always gravitated towards singer/songwriters. People that I would hear on the radio. Specifically, recording artists like Billy Joel, Elton John, and Stevie Wonder in particular.

Artists that were really for me, were my icons growing up, and that stemmed into some other bands growing up. And that eventually, also became a really big influence for me. Earth, Wind and Fire, some of the other RnB artists, such as Marvin Gaye.

To this day, those are my biggest influences and of course, everything changed after I went to college and everything. But initially though, in my childhood and my nurturing years, if you want to call it that way, I trying to figure out what music meant to me, it was about those kinds of artists.”

Your resume transcends entertainment, as you’ve indulged in humanitarian work. Which project was your most memorable, and why?

Do you consider yourself to be a role model for those in the Latin American community?

“I don’t know if I necessarily consider myself a role model to the Latin American community. I try to be the best example that I can be, as an artist, as a Hispanic American, and as an Afro-Cuban American.

I’ve always felt that to be a huge responsibility if that puts me in the category of a role model, so be it. But that was never my intention, I’ve always tried to just be the best example I can be for young people in the Latin communities, especially in education. I’m a big believer in that, always have been, always will be, from that standpoint, again just try to connect with Latinos over the last thirty years as best as I can.”

At what point in your life, did you realize you wanted to pursue music professionally?

Taking into account your entire music catalogue, can you name a favourite song?

“If I can pinpoint a favourite song. Well, in my thirty years maybe as cliche as it might be, it does start with my very first hit. For numerous reasons. The first song that I wrote for that record, was for my  debut album. This was created with my songwriting partner Miguel Morejohn.

So it was a first for many things, and it’s something that’s become an anthem. As a result, I think spiritually, and emotionally, it is my favourite song. Without it, I would not have a career I don’t believe, as a recording artist.”

What was it like collaborating with music icons such as Jennifer Lopez, Ricky Martin, and Gloria Estefan?

“Well I started in the music business being a songwriter, especially after I met Emilio Estefan, he was my manager for eighteen years. I worked under his production company for the very first five years of my career.

Dealt with just working in the studio, being a songwriter, producer, doing background vocals,  and anything that dealt with being behind the scenes so to speak. I got the chance to work with Gloria Estefan at the very beginning of my career, if it hadn’t been for her, I don’t think that I would have the career that I have today. The songs that I did and the opportunities that came about working with her very early on, and spilt over into my career as a recording artist.

Even as a recording artist, I still kept writing and working with other artists as well. Like Jennifer Lopez and Ricky Martin. Even though my career was already going on, and I was having hits of my own on the radio. So that instinct to work, write, produce, and collaborate all started all because of my relationship with Gloria Estefan.

As a trailblazer in the music industry, what legacy do you wish to leave?

“Legacy for me, that’s a big word. I don’t take that word very lightly. Again, I feel very fortunate, very lucky. My career in the early nineties started as a recording artist singing in both languages if anything I feel very proud of the fact that as a Hispanic American, as an Afro-Cuban American, I started this recording in English first and then Spanish.

I’m very blessed to be a part of a time, that hopefully I made a difference as a Hispanic American, as an Afro-Cuban American singing in both languages, and giving my roots, my traditions as a Latino.

Especially with the mark that I made in the 90s Latin Music Industry. I’m so proud of that, and I’m proud of where we’re at and the fusion that the field was brought to the mainstream market across the board. So that’s a wonderful thing to feel to have been a part of.

What inspired you to fuse funk, soul, and pop to create your style of music?

“I have always enjoyed, especially after going to college, the idea of fusion. The idea of combing different musical elements, and whatever was on the radio that I enjoyed, putting it together in a way that made sense for me as a songwriter, really as an artist. Once I started to think about myself.

I ended up combining musical elements at that level which was just natural. It was the only way that I thought of figuring out what I wanted to do. Kind of taking bits and pieces from all these different artists and musical styles, and once I studied jazz music, forget it—that brought a whole different element to my career. After getting my degrees in music, my bachelor’s and my masters in jazz music.”

What mantra, if any, do you grab ahold of when facing adversity and opposition in your musical career?

“Well, for me the music industry, just became a landscape by which for me to be a musician. Without taking away any ambitions, my psychology was always to enjoy the craft of what I studied and who I wanted to be as a professional musician and utilize my education to help me work in the music industry in whichever capacity.

I got the opportunity to do so early on, as a songwriter, producer, teacher, and musical educator. So again I have a blue-collar mentality, I have always had that. That has never left my heart and who I am as a musician.

What’s next for Jon Secada?

“This is a very special year for me, it’s my thirtieth anniversary since my very first CD came out, as a recording artist. I’m enjoying this year with some new music, I’m in the studio with the passion and desire to create music, collaborate, sing, do my shows, share my career with fans that have been with me all along, and perhaps some new ones.

Some of that fire has never gone away, I don’t foresee it going away any time soon. So as long as God gives me the health and I still can sing and perform, I will continue to do so.

What keeps you motivated to continue making impactful music for your fans?

“I think what keeps me motivated is still my inner drive, desire, and passion. Especially with my fans, who still enjoy that I’m in the industry. So that keeps me going, the fact that I still get a sense and a feeling that people still want to hear from me and my music.

What advice would you have for aspiring music artists?

“My advice for aspiring artists, instinctively is to educate themselves. Really in whichever way they feel, you feel. It’s something that matters to you -learn the craft.

Knowledge, in my opinion, is the key to the freedom of creativity. It gave me the confidence in my personality, to do whatever I’ve done, and the strength of mind to feel secure Make those ideas come from where I’m sure of myself and that I know what it is that is deep in my heart. Because I’ve thought about it enough times, I know what I feel is important. My education and knowledge is what allows me to do so.

That’s always my first piece of advice to any aspiring artist — educate yourself. The business is complex. Apart from it, is educating yourself too, as far as the business of music. So many elements to learn about in any type of career in my opinion. So it’s the same for the music industry; education is the key. However you get around to learning what it is you need to do, and then after that, it’s all up to you. Your ambitions, your discipline, your sacrifice, what are you willing to do to stay the course? And to live—live and stay the course.”