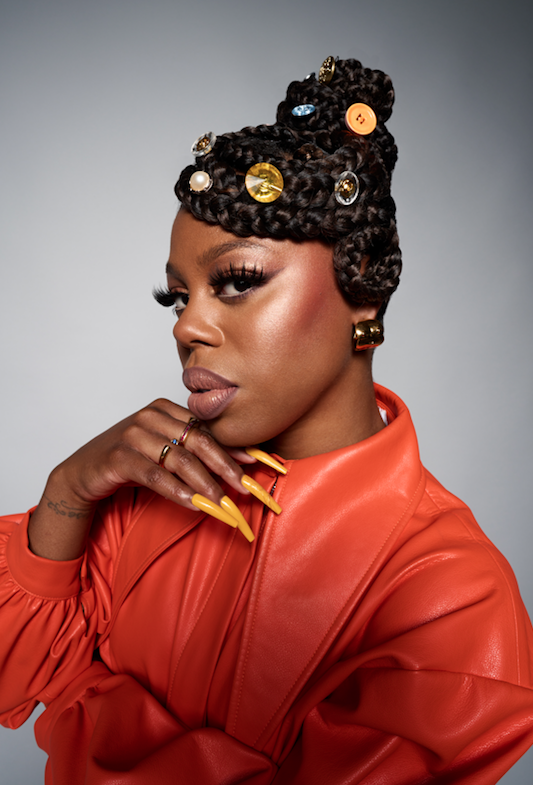 Gail Bean is best known for her role as Wanda in FX’s “Snowfall”. Talk about giving and being a voice to the unheard on “Snowfall” and now “P-Valley”.  She is on some of the most popular shows and paving the way for women of color and the next generation that follows.

Gail stars as ‘Roulette’, a straight shooter, no game-playing dancer. As with several of the ladies, she has a past that she is running from, and finds community and solace at The Pynk. She’s enamored and downright inspired by the ladies calling their own shots and living on their own terms.

P-Valley tells the kaleidoscopic story of a “little strip club that could” and the good folks that come through its doors — the hopeful, the lost, the broken, the ballers, the beautiful and the damned. It’s a tale of two cities if you will, the day-to-day folks that keep a city moving, and the underworld of an all-American southern city of folks—simply trying to make it.

British Thoughts got a chance to catch up with Gail Bean, aka Wanda.

Chelley: Who is Gail Bean?
Gail: Gail Bean is a happy black woman, who tries to find joy in all things. I’m a realist, very loyal, I’m truthful with myself and others around me.

Chelley: What makes Gail happy?
Gail: My family makes me really happy, and making others feel good makes me happy. I’m naturally a giver and love seeing people win. I’m a “Delta” and I’m big on service.  I like having fun and enjoying life, traveling with good people with great energy. “Real is rare, so is loyalty”, says Gail!

Chelley: What sparked your interest in acting?

Chelley: Talk to us about that big moment when you found out you landed the role as ‘Wanda’ in ‘Snowfall’ and now ‘P-Valley’?

Gail: There were small signs and premonitions of what good was to come. I met a Delta sister, who was a writer for the pilot of P-Valley during S1, and then she went over to S3 for Snowfall. Our paths crossed again after I had already auditioned for P-Valley (I didn’t bring that up, though) in 2019.

I shared with her that I was a writer and expressed an interest in wanting to shadow her, being a writer’s assistant being a fly on the wall to learn. When I first came to Snowfall, it was S2 E1, it was a world where you didn’t see the storyline and didn’t know it would be a well-rounded role. I was just so excited to be on the show, on a John Singleton project! S3 Tash, (my Delta sister) along with Walter Mosley created this whole world of this amazing storyline for ‘Wanda’. Walter was always pitching a storyline for me, he would always say “Gail can do that”, “Can Gail do this”?! To have Walter Mosley advocating for you is another level of “favor”! I never knew ‘Wanda’ would grow to be what she is now!

Chelley: What impact do you want to make in the entertainment industry?

Gail: As a black woman/person, I want people to see “US”. All colors and races, I want them to see us, and not just look through us. I want them to see our hearts, our pain, and just empathize. I don’t want it to be a thing where we as black people feel overlooked and numb. No one will ever know what it’s like to be a black woman, but I want to do my best to make sure I come close to making sure people see “US”! As an actress, the closest thing we can do is show people a day in the life of who we are, as women of color.

Chelley: What kind of legacy do you want to leave behind to the next generation that comes after you?

Gail: I want to leave the next generation knowing that “The sky’s the limit”! If you can think of it, you can achieve it.  DREAM above the influence. We have so many different influences around us, so many things that influence our minds, Don’t let anyone box you into one thing. I want the next generation to drink and digest that thought into their souls as much as they do water, that “The sky’s the limit”!

Chelley: What opportunities would you like to see more of for women of color in the entertainment industry?

Gail: I would like to see more women of color in executive roles such as department heads, directors, vice presidents, head of casting, the top of the top, etc.  The beauty in that, is they have the ability to change our lives and to put people of color in another tax bracket. You can make a choice to change history and what it is. I will continue to pray that we have more people of color in spaces that will be of the community. I would also like to see more women of color normalize supporting each other.

Chelley: Name a moment that’s most memorable to you in your career and why?

Gail: Everybody knows I love Taraji. I went to an Amanda Seales screening and Taraji was there. This would be my first time meeting her, and I’m thinking to myself, “I have to wait for the right moment”! This was after S2 of Snowfall, we hadn’t even gotten to S3 yet, and I went to her and said, “Hey Taraji” My name is Gail Bean, and I work with… and before I could get the words out, she screamed, “I was just watching you, you were tied to the radiator!” At that moment, I could not believe it, I was like “What?”, I can’t believe she knows who I am. Taraji said to me “YOU GOT NEXT!” That was so mind-blowing for me.

Gail: LIGHT; I try to shine my light on everyone that crosses my path and anyone that I encounter. FAVORED; I know I am highly favoured, because it’s nothing that I have done, all of my blessings, success, and talents come from GOD. FUN; I am having such a good time, Gail laughs!

Chelley: How do you want to be perceived by the world, your peers, and your fans?

Gail: I want to be perceived as my genuine and authentic self!