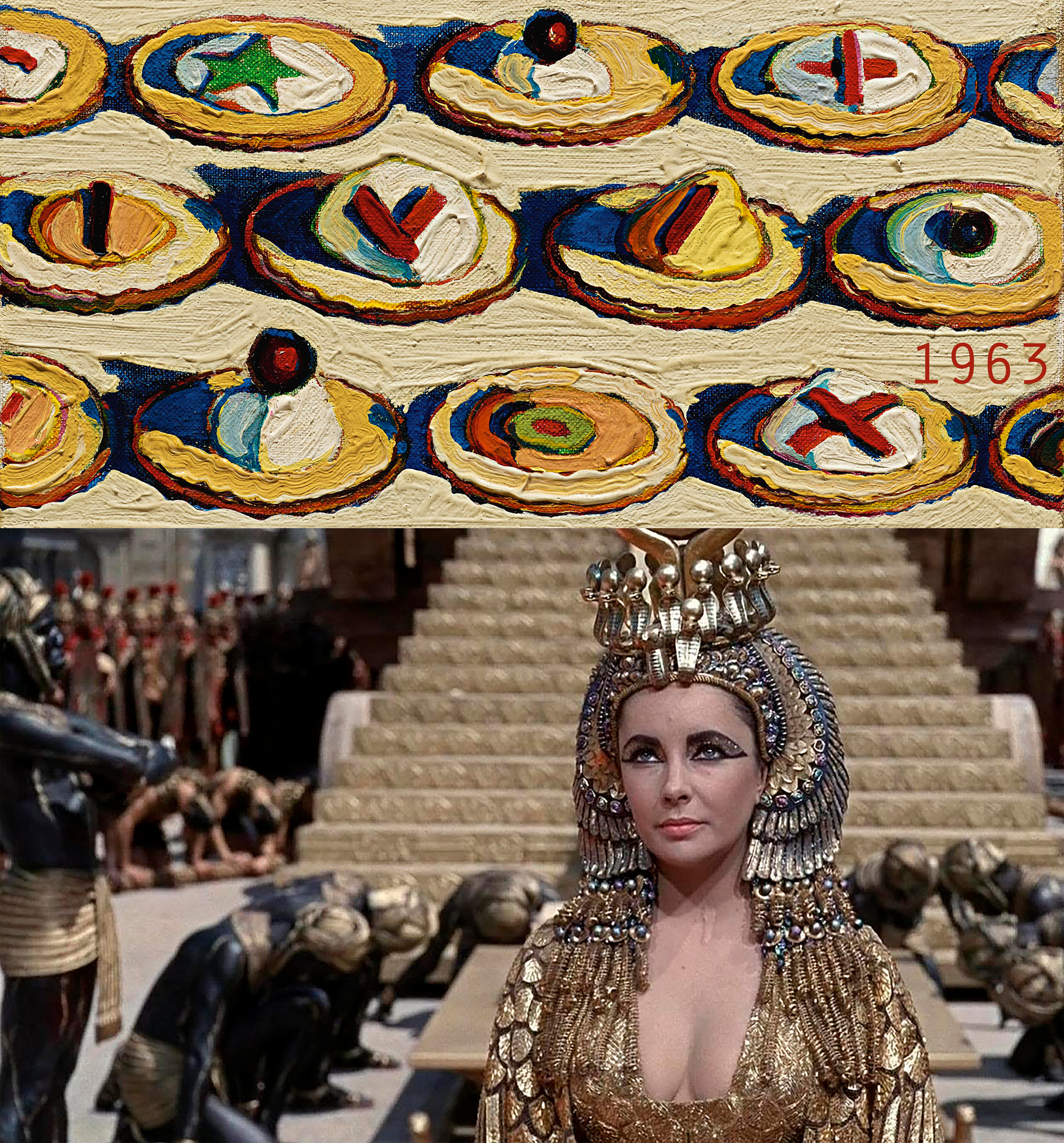 As one of the most well-known political photographers in the United States, Bonnie Lautenberg, had a career that spanned more than 20 years, capturing the most striking historical images of former Presidents Bill Clinton and Barack Obama. Over time, Bonnie channelled her creativity into developing a series of photographs that gained the attention of numerous galleries and private collectors.

This year, Mrs Lautenberg showed no signs of stopping when she presented her latest exhibition, “Art Meets Hollywood,” with the Boca Raton Museum Of Art. Describing this collection as a juxtaposition of two art forms in one, Bonnie combined iconic movie scenes with outstanding works of art as an experiment to see how they would look together, even if there were no real connections. To her, this exciting challenge transformed into a collection of 90 pieces.

“It is through her careful considerations that she brings to life each moment in time and the spark of creativity these pairings might have shared,” Art Director Irvin Lippman of the Boca Raton Museum of Art says about Bonnie.

“Lautenberg possesses a keen eye for the visual elements of humanity and culture that arise. The brilliance of these juxtapositions is how she illuminates the psychological connections between each film scene and artwork,” he adds.

We at British Thoughts had the immense pleasure of chatting with the talented photographer as she talked about her latest exhibit, creative endeavours, and upcoming projects that we should watch out for. 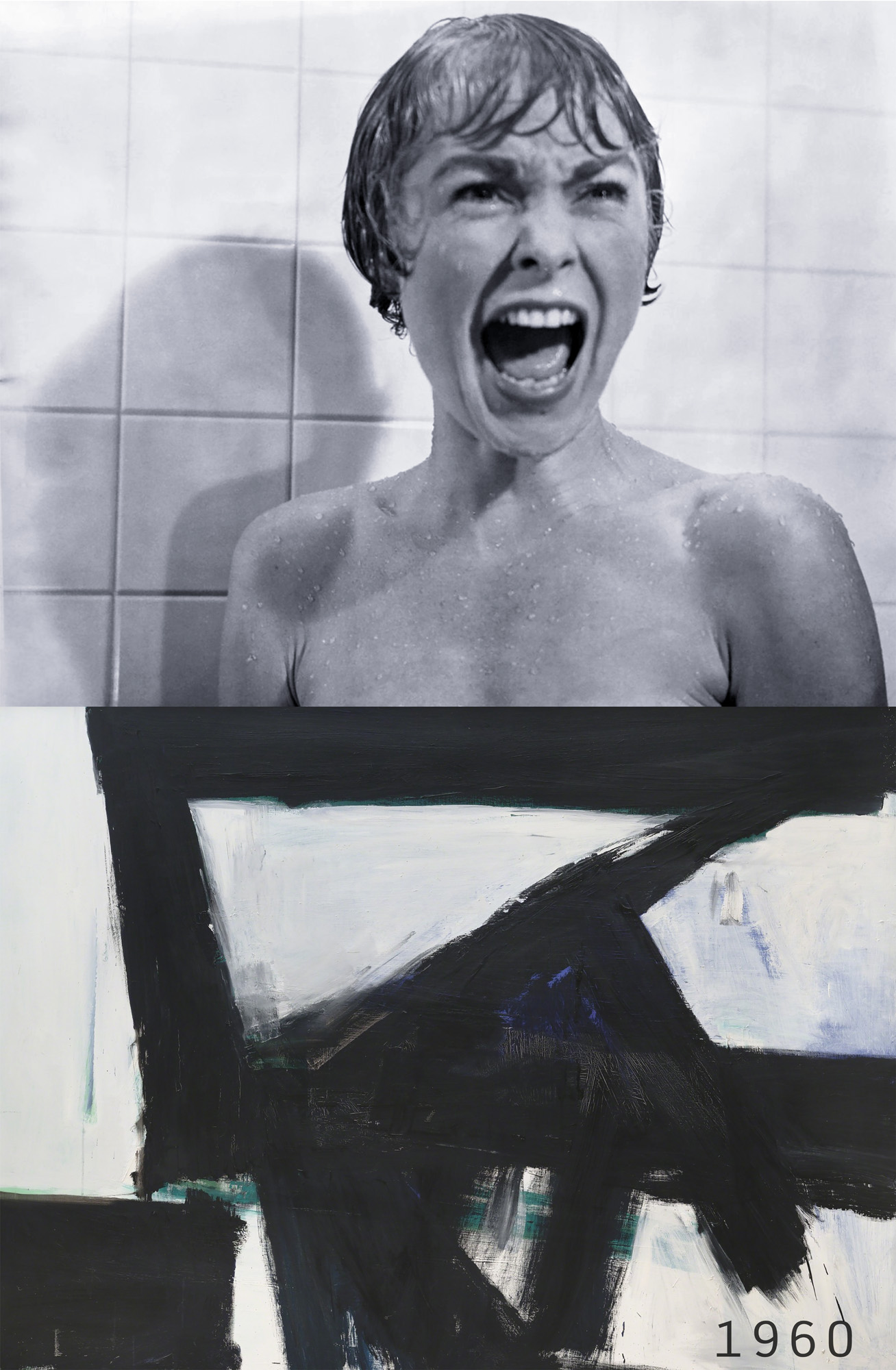 A pleasure sitting down with you, and congratulations! Could you tell us where you got the inspiration for your latest exhibit, “Art Meets Hollywood”?

The inspiration for Art Meets Hollywood came from my head while thinking about how we as artists are inspired, stimulated, and influenced by current events and the world around us. I had been a photographer for a long time and created different bodies of work that I thought was somewhat unique and interesting. But then I wanted to do more, and I was deeply thinking about what influences artists, whether we are photographers, painters, sculptors, etc. Are we as artists influenced by other artists and art forms? The answer to both is yes. So I started thinking about how one can affect the other and started playing around with two art forms I am passionate about — film and paintings. After close to 90 pieces, I included Cindy Sherman, the photographer known for her creative portraits, the light and space artist James Terrell and the fabulous quiltmaker Bisa Butler, whom I first noticed at an art expo in Chicago the year before Covid.

As an artist and photographer with years of experience in the field, what was the message you were hoping to convey with Art Meets Hollywood?

When I started this project, I decided it might be even more interesting if I used a film and a painting done in the same year, so if a movie came out in 1960 and an artist was inspired by that film, he could make his painting in that same year. It made the pairing more difficult because I had less to choose from. I loved the challenge of finding pairings that were as interesting as possible. Sometimes I got fortunate but getting lucky took a lot of work! The message I was hoping to convey was artists using one art form are inspired by artists using another. When I was way into this project, I was searching for paintings and going through Sotheby’s and Christie’s catalogues that I had for years.

In one of them was a Fontana painting for sale. It also had a story attached to this painting about Fontana. He went to see a movie called the red desert by the Italian director, Michelangelo Antonioni. This film so moved him that he went to his studio and painted the largest red painting ever made and put 24 slits into this painting, the most he had ever slit in any artwork before. I also believe film directors could be influenced by illustrations, as in my 1928 piece where I used the movie the mysterious lady and paired it with a Magritte painting called “The Lovers.” 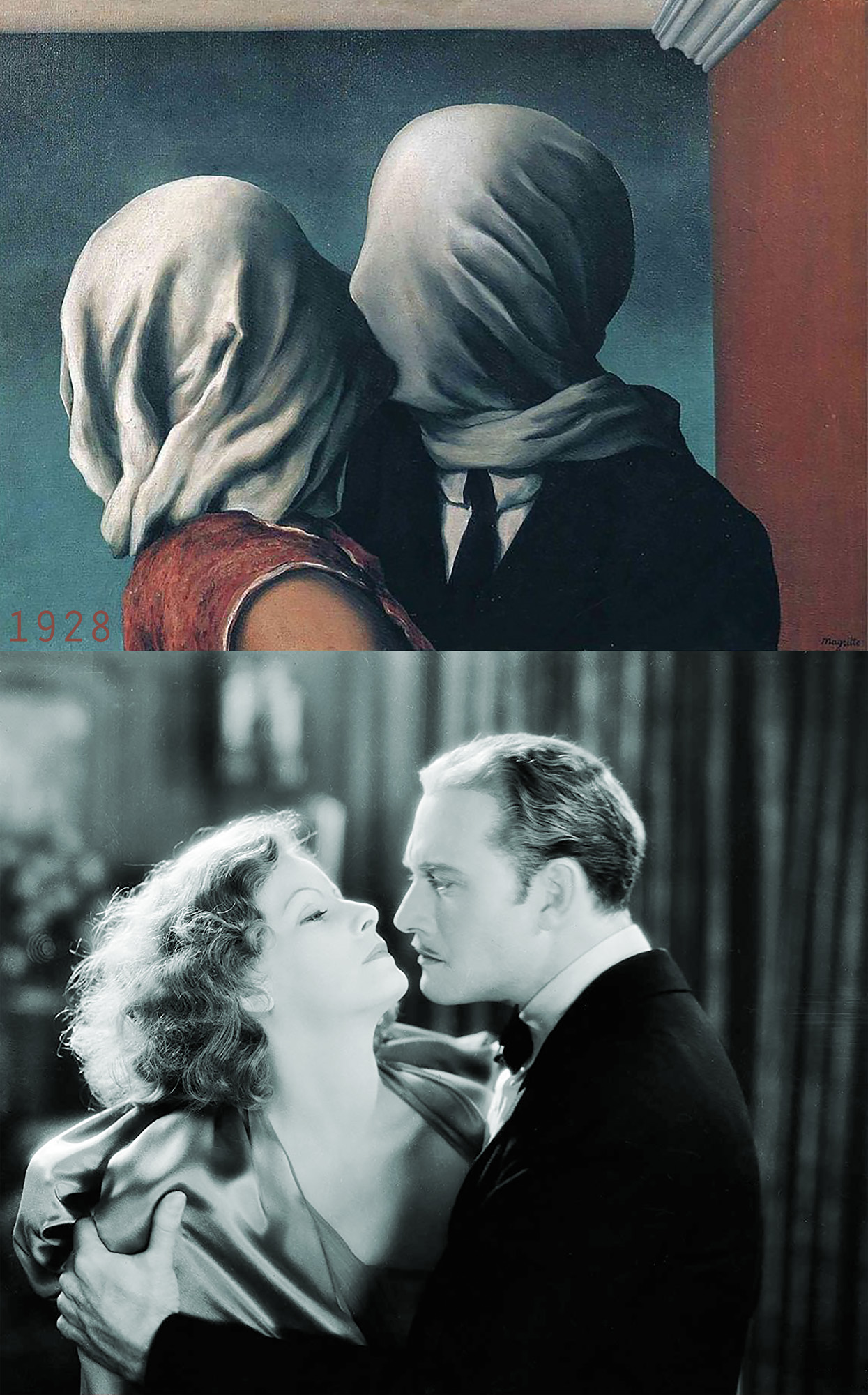 When it came to pairing up each film scene and art piece, what was your point of reference when it was down to choosing what was the most visually striking to your eye and mind?

The pairing of these two art forms was pretty challenging. It wasn’t and isn’t always so easy to find a great match from one art form to another. I would say when I see one pairing, that works for me. I can say voila! I stop looking. Sometimes it’s so exciting, for example, in 1932. I loved that Georgia O’Keefe flower, Jimson weed, white flower No. 1.

When I discovered the film Grand Hotel was done in that same year and found the scene with Greta Garbo wearing that white tutu. It looked like Georgia O’Keefe copied her flower from that tutu. I was ecstatic. I couldn’t believe that I had found this perfect pairing. I felt the same way about 1938 when I discovered Betty Davis in the movie Jezebel wearing her white dress all trimmed in lace. Then I found Matisse’s Lady in Blue, also from 1938, who painted his lady in a lace-trimmed dress. Both ladies have fancy necklaces on and lots of bracelets and rings. It was a sensational match, and I was screaming with joy. I was convinced Matisse saw the movie Jezebel or the film’s director, William Wyler definitely saw the Matisse painting.

I wanted to use Marilyn Minter’s piece called Scrumptious, a painting done in 2004 of big red fabulous lips with jewels in her mouth. Now I needed a movie still to go with it. In my research, I came across two leading characters kissing in the film, Eternal Sunshine of the Spotless Mind. It was the perfect match. There are rarely two images to choose from once you find a great match. I struggled with this image for several weeks until one day. I saw a James Terrell piece changing colours as they all do. I studied it, and when it turned red, I said, “That’s my match”! I was on the computer, so I took a screenshot of the image when the colour became red. It was so perfect; this was a fabulous pairing. My 1999 is a stunning image. 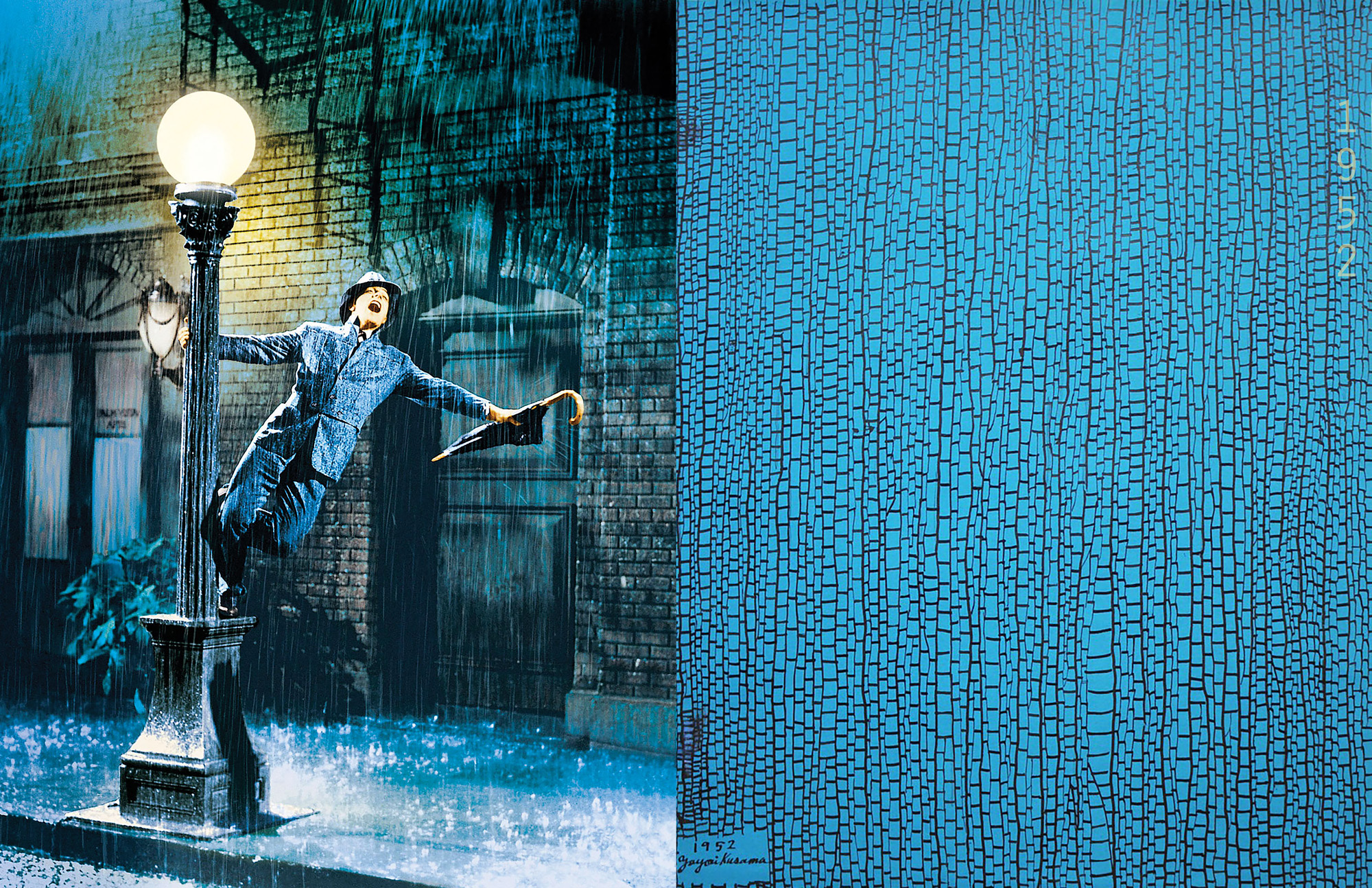 What was compelling about the combination when pairing Singin’ In The Rain and Kusama’s painting, The Sea?

Singing in the Rain was one of my very early pieces in this project. I love Gene Kelly, and the iconic image of him standing on the street lamppost in a dancer’s pose was going to be included in this project. I adored the movie and always loved the scene of him singing and dancing in the rain. But, of course, finding the perfect pairing is a challenge. I love the artist Yayoi Kusama, and somehow, I looked up to see what she had painted in 1952.

I wanted to scream with joy when I saw her painting of the sea from that year. The color matched the Singing in the rain scene almost precisely. Her image reminded me of the brick in Singing in the rain, which looks like rain is coming down. It was gorgeous together and has been so successfully loved and appreciated. The movie is 70 years old, and Gene Kelly’s wife, Patricia Kelly, reminded me of the opening of my exhibition at the Boca Raton Museum. She also told me he had a fever of 103 degrees when they filmed the scene. He was also the choreographer, director, and star of this movie. But even though the movie is 70 years old and the painting as well, it looks so fresh as they are paired together 70 years later. The piece is timeless! 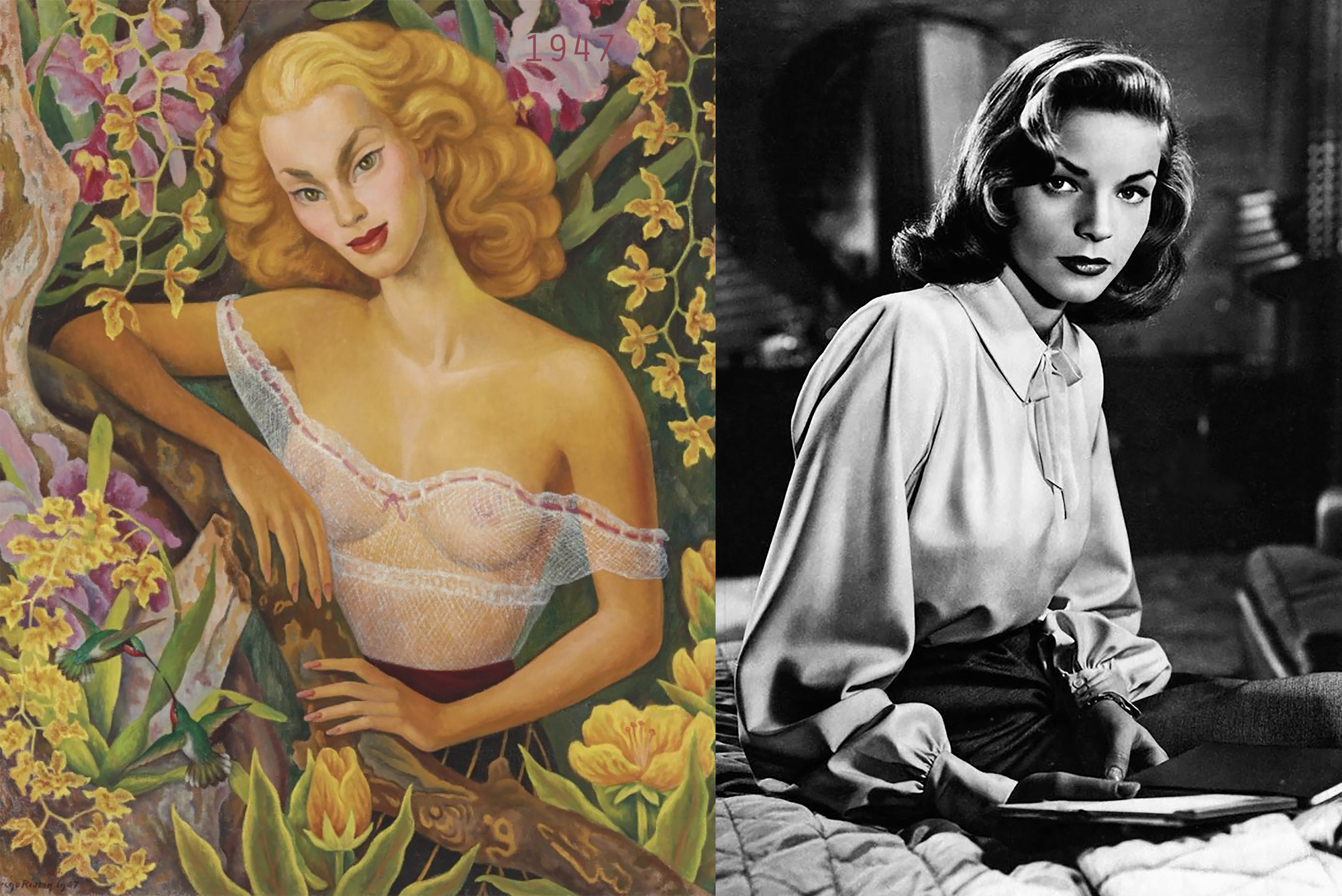 Are there other mediums that caught your attention that you would be willing to explore and combine with photography?

Artistica! Where Art Meets Hollywood or Where Hollywood Meets Art History in some articles has been a labor of love. I have 90 pieces in this project, and I’m not done yet, so as I am still busy exploring film and art, I have not started exploring other pairings. I am not saying I wouldn’t explore other mediums with photography but just not right now.

If we were to ask, which one is your favourite piece out of them all? And what makes this series different from your previous ones?

I can’t say I have one favourite because I have so many that I love. My favourite is always the latest piece I have paired because it fills me with such joy and excitement that I can’t wait to show it to everyone I know.

This series is different from any other I have done because I have been working on Artistica! Where Art Meets Hollywood or Where Hollywood Meets Art History for five years. It’s been a labor of love and passion, and I am not tired of it at all. It still fills me with joy and excitement. The Boca Raton Museum put this project on the map for all to see and read about. I feel so lucky to share it with so many people in person at the museum and through photographs of these images in magazines and newspaper articles. In addition, I have worked in 7 other museum collections, including the Library of Congress in Washington, DC, which has my project “How They Changed Our Lives: Senators as Working People” online.

That project was also greatly appreciated and is about the legislation Senators wrote that has changed our lives. It was installed at Mana Contemporary in Jersey City, NJ, and was a beautiful exhibition of 100 images of the Senators in the 109th Congress. That should have been a travelling exhibition because it was so important for kids to learn what these Senators have done that will change their lives and their parent’s lives.

No smoking in aeroplanes, Americans with Disabilities Act, Violence Against Women’s Act, Dodd/Frank, McCain/Feingold, Computers in Schools, etc. Sadly, no other museums responded to this body of work after Mana Contemporary, and it never got the recognition it deserved. Still, the Library of Congress wanted it, and I am thrilled about that. With Art Meets Hollywood, I was fortunate to connect with the Boca Raton Museum’s Director, Irvin Lippman, and the Chief Curator, Kathleen Goncharov. They loved this body of work to go along with the great exhibition of hand-painted Hollywood backdrops. Art Meets Hollywood stands the test of time and is incredibly important because people can see it in person for a long stretch, allowing people to keep talking about it.

Lastly, do you have any upcoming projects down the pipeline that you can share?

The Monika Olko Gallery, a contemporary art gallery located in the historic district of Sag Harbor, New York, will present a gallery show of my works (opening on August 19). The C. Parker Gallery in Greenwich, Connecticut, will also show my results in a new exhibition (which opens on October 13).

I have an excellent piece of work in the New York Historical Society Museum right now in an exhibition about the pandemic. It is three images of Lady Liberty, where she is wearing an American flag mask. It has been said it is the iconic piece from this pandemic. Quite a compliment! If you go to my website, Bonnie Lautenberg, you will see it front and center.

I am always thinking about new projects and new work. Hopefully, I will have a musical on the life of Andy Warhol and a book I have coming out about my late husband, Senator Frank R. Lautenberg (D-NJ), which should be published at the end of this year or early in 2023.

For more on Bonnie Lautenberg and her work:
Instagram: bonnie_lautenberg

For more on the Boca Raton Museum of Art:
www.bocamuseum.org