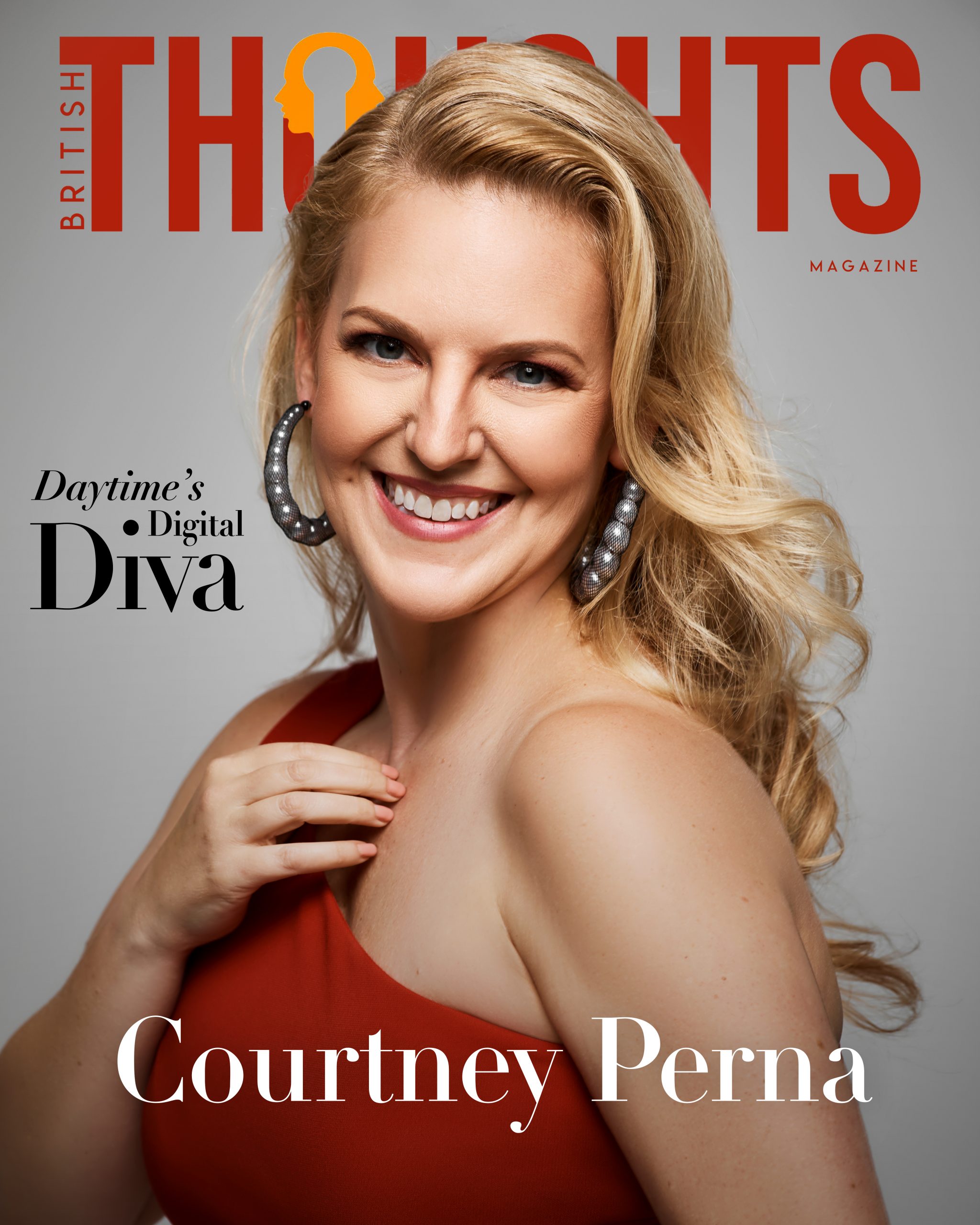 In broadcast journalism, no singular moment would be considered dull. The long days, the thrill of chasing the latest scoop, a cup of coffee in hand, the adrenaline goes wild. But as the saying goes, “Journalism will kill you, but it will keep you alive while you’re at it.”

Others have given up pursuing such a tough field, but that’s not the case for Courtney Perna. Over her blood, sweat, and tears, the media and the broadcasting world became her passion and life. Such a switch from performing as an aerialist and Las Vegas showgirl. Now, she’s an Emmy Award-winning lifestyle TV host and producer working on extensive networks such as CBS, FOX, and Fox Sports. Even with the fast changes occurring in technology and media, blurring the lines of traditional mediums with the disruptive power of social media, Perna meets this challenge head-on with resilience and a powerful voice. Oh, and her charming mega-watt smile.

Here at British Thoughts, we had the fantastic opportunity to chat with Courtney Perna as she opened up about her career in media, challenges, and the latest project under her belt. 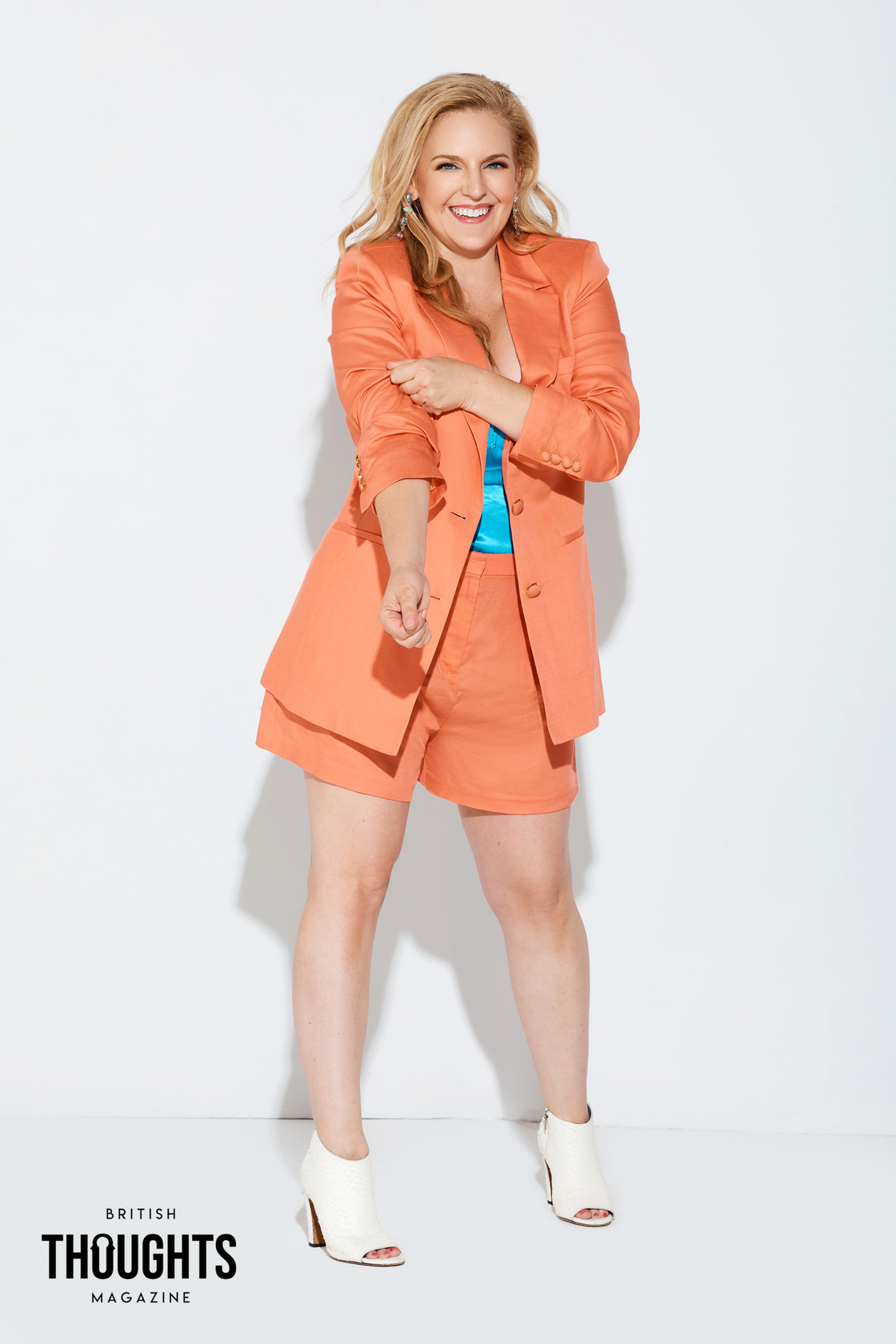 Hello Courtney, thank you for taking the time to speak with us. To start, I must say you have a fantastic life story. Could you tell us about this pivotal change from dancer/performer to broadcasting in your life and how it happened?

Honestly, I was sick of being criticized for my weight. I was placed on “weight notice” as a prerequisite for joining “Les Folies Bergere”, the beautiful, long-running production show on the Las Vegas Strip, as an acro-dancer and showgirl. And get this: management wanted me to lose three lbs. (1.36 kg).

Plus, as an aerial-acrobat, the motto is always “circus hurts”. And it did. Every day. Every performance. After a wonderful stint as the aerial “Ariel” The Little Mermaid at Tokyo DisneySea, I had to make a decision on whether I wanted to stay on the acrobat path and possibly start training with Cirque du Soleil, or if I wanted to go back into TV, which I believed had more longevity.

So, I decided to go back to a TV career even though I loved performing with all my heart. Spoiler alert: there was much pressure on female on-camera talent back then to stay thin too! But at least I can wear Spanx on TV, haha!

What were the challenges you encountered when you first started broadcasting? Was there a particular situation that stood out?

The 4:30 a.m. live shots outside… in the middle of the cold Michigan winters.  No, thank you!

Scooping story details from my competitors while chasing witnesses, accused criminals, victims, police, and more was tough. But, controlling my emotions, when I returned to TV news a second time, was an even bigger struggle. An empath like me can find it difficult to cope when terrible things occur within the community. Then again, I think that’s why I got a few exclusive interviews or more in-depth interviews with victims, family members of accused criminals, police, and first responders. They could sense that I cared for them and wanted to give them a voice, not just exploit their story on one of the worst days of their lives.

However, I still love interviewing people – anyone from an A-list celebrity to your neighbour –  everyone has a story. My advice to aspiring hosts, entertainment reporters, or podcasters: understand that interviewing is an art. It’s more than just asking questions. It’s about guiding a conversation, building a connection with your subject and giving them support and comfort.  No matter who they are or whether you agree with them, listen to them – it’s about them, not you. 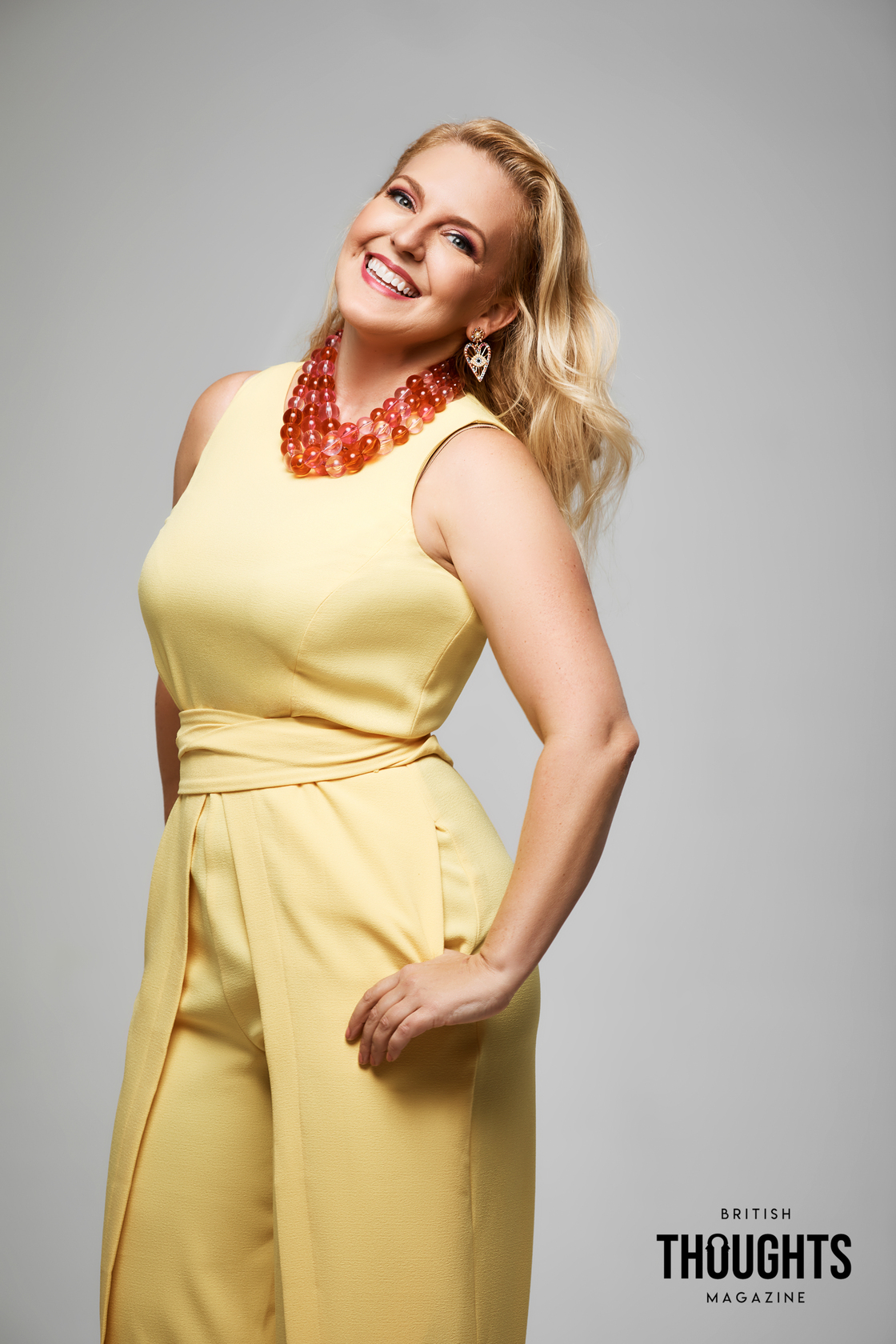 If you were to name the top 3 most influential people in your life that helped pivot your career into where it is now, who would they be and why?

Both of my grandmothers have been hugely influential. Many women in my family couldn’t dare to dream as big as I have, or maybe it just didn’t seem like an option, but they both encouraged and inspired me in different ways to seize the day and not be afraid to go for it.

My high school English teacher Ms. Nemesi was crucial in choosing my career path. When I wasn’t doing so well in my advanced calculus class during my freshman year at Michigan State University, she was the first person I called. From there, she encouraged me to pursue writing even if I relied on Cliffnotes during her classes! Although print journalism wasn’t my thing, when I discovered broadcasting and video production, specifically editing, I realized video is my medium of choice. That’s when I fell in love with the art of storytelling.

And finally, my best friend, Michelle. She is living her dream as a teacher and mom, which is very different from mine and more stable, I might add. She often reminds me, “I live vicariously through you.” So, I try to enjoy every risk, victory, odd side job I’ve taken, every failed love affair, every impromptu solo trip far away with positivity. We may live thousands of miles apart, but we are yin and yang personified.

Since you launched Brunch with Courtney Perna, what are your thoughts on the current direction of broadcast media and streaming services?

This is the biggest disruption in media and broadcasting possibly ever – much to the dismay of big, traditional broadcasters. At first, I was one of those people who were put off by it too, because there was a possibility these new “untrained”  personalities would take our jobs. Yet, if you embrace this change, even lead it, it can be incredibly freeing and empowering. Streaming is the Wild, Wild West, but if you’re brave enough to grab it by the horns, surrender, and enjoy the ride, it can be magical. Plus, these new, niche platforms open the door back up to women – especially “women of a certain age” like me. This is just the beginning! Nothing is “too late” for us. 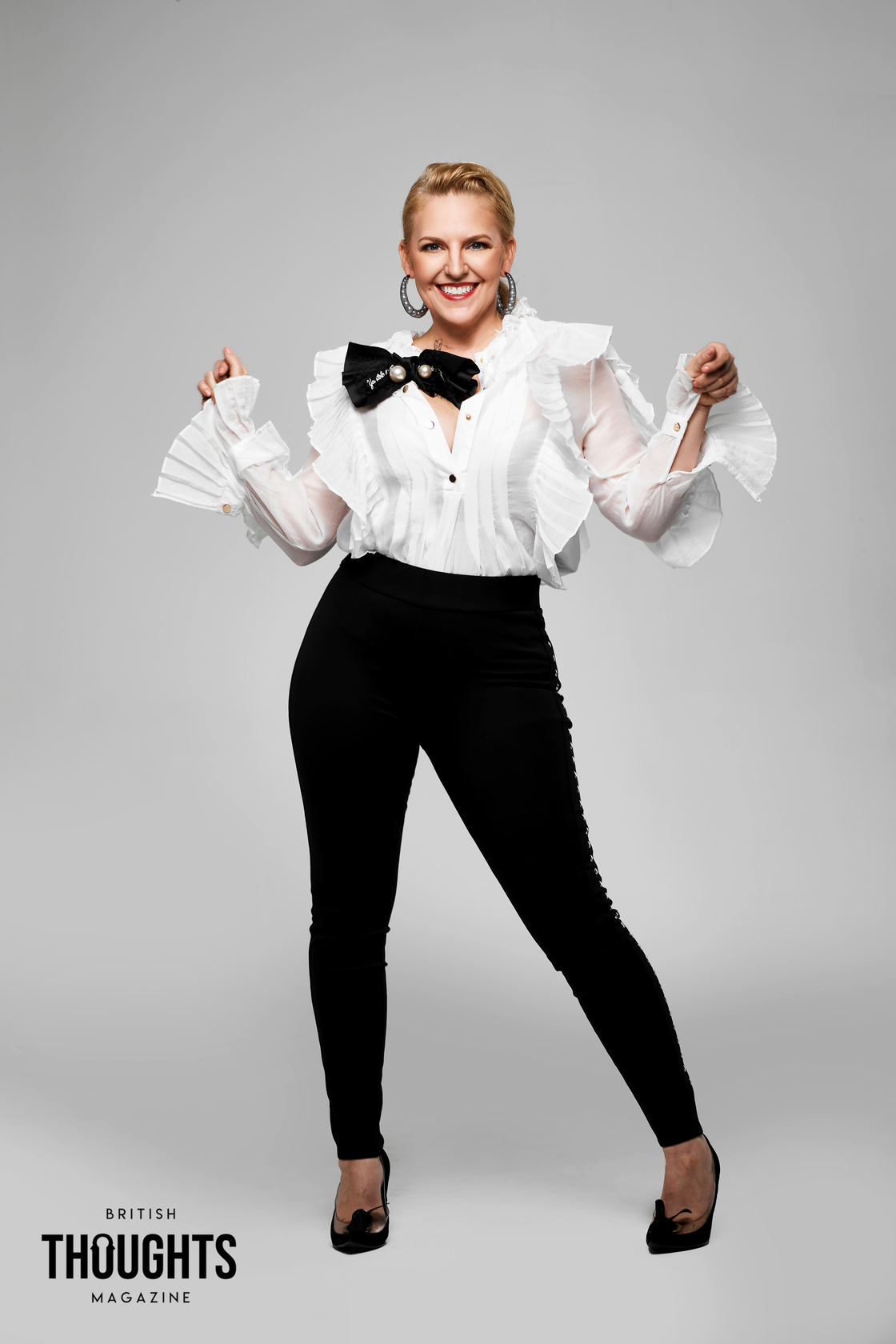 How do you think the future of global media will be in the next few years with the influx of podcasts and different streaming services?

Global media is an ever-changing industry that’s nearly impossible to pin down and label, but I think there will be more niche content. So, the slices of the pie for advertisers and networks to make money might decrease per show, but they are getting a more targeted audience. Plus, it’s a victory for viewers because the content will be made almost exclusively for us. It’s stuff we want to watch and engage with.

However, it gets interesting from a talent standpoint because it’s a tough pill for us “trained and experienced” TV presenters to swallow: our degrees and skills don’t always matter anymore. Streaming helps to even the playing field for the “smaller fish” in the pond, whether that’s talent or the networks themselves, and the traditional “big fish” in the media realm need to watch out!

Could you tell us about your latest network project, ‘Dame Good’ and how it came to be?

Dame Good network is a diverse, female-forward collection of content geared towards uplifting the sisterhood instead of women competing against each other. I want everyone, from the content creators and on-camera talent to the creative behind-the-scenes team members, to get their voices out there and connect with a global audience.

After realizing nearly all of my guests on my show “Brunch with Courtney Perna” are so empowering and inspirational that they should have their own show. This gave me the guts to start building my own network, which is not something I ever thought was even possible, but here we are! Look for Dame Good network on Roku, Apple TV, Amazon Fire and more in early 2023.

What can we expect from seeing the female positive content on Dame Good? What sets this network apart from others?

Expect to see the types of women we don’t normally see represented in mainstream media – whether it’s because of their race, religion, age, sexual orientation, gender identity, etc – we all deserve to be heard. You’ll see content made by women for women and our allies, from cooking, travel, crime documentaries, movies with badass female leads/directors, and talk shows featuring deep discussions, we got you covered.

To cap things off, name three words that make you feel “dame good” about yourself, and how can this impact others?

Empowered, Brave, Empathetic. It’s about time we stop competing against each other and start supporting each other as women. We can all win! I hope to inspire others to not only speak up, go for a dream and stop making life decisions from a place of fear, but also to support and empower other women, girls and our allies so they can pay it forward when the time is right.

To watch the show and to get more information about being featured or becoming a sponsor, go to BrunchWithCourtneyPerna.com