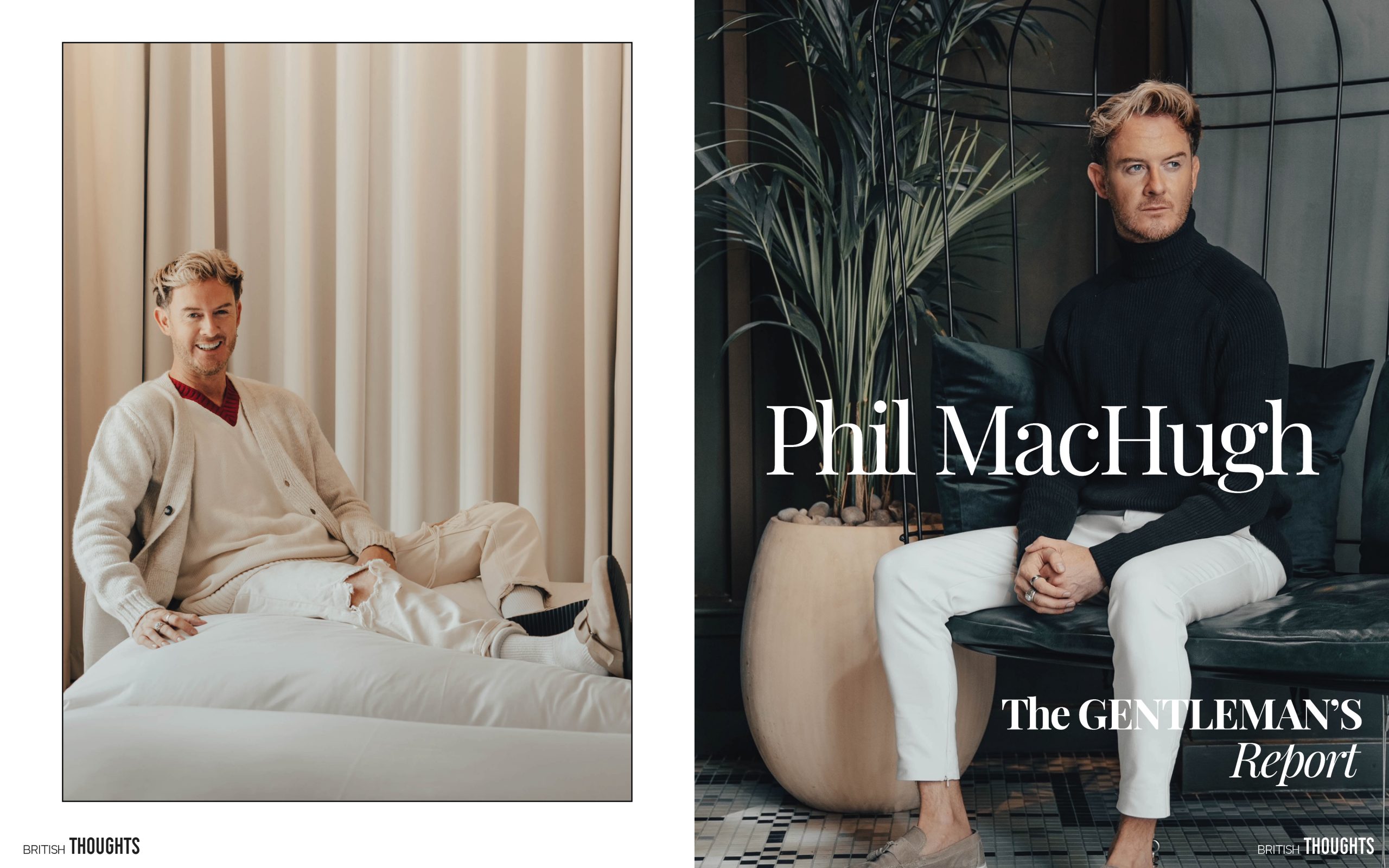 Regarding media and the arts, British talent has long been regarded as among the best in the world. The BBC and its roster of famous personalities that have crossed the pond are currently Britain’s most important exports, which is not surprising given the country’s history as the cradle of the English language and literature.

Phil MacHugh shaped a name for himself as one of the most well-known faces on UK Television and later made his way across channels with appearances on NBC and CNN. MacHugh comes from a long line of prodigious individuals in the arts; he entered the world of media by joining the BBC and hosting shows such as Smash Hits TV, BBC Scotland’s @Ire and Dè a-nis?, and Beyond 2000. In 2016, he set up SKAPA, a PR firm specialising in brand management with clients such as Pentahotels Group, Living Ventures, Principal Hotels, Barbour, and Toni & Guy. Since then, the build-up of his career reached an all-time high, with him being declared as one of the hottest men in the know for all things trending and has worked with VISIT SCOTLAND and the Glasgow City Council to promote international Celtic festivals across the world.

We interviewed Phil for another edition of the Gentleman’s Guide to get his thoughts on what it’s like to be a modern man, travelling with Martin Compston on The Scottish Fling and upcoming projects. 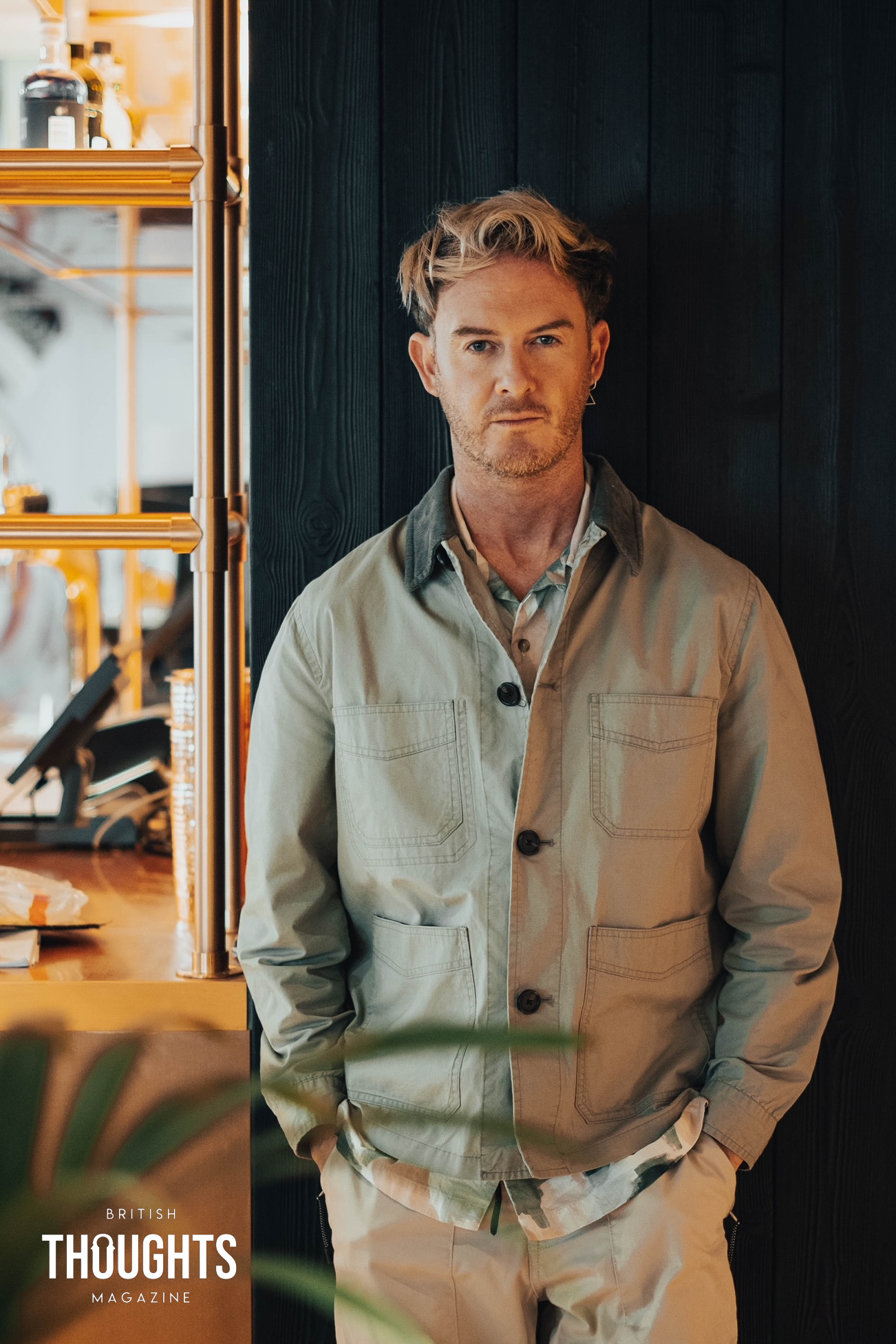 As one of the men in the know and one of the most recognised faces on British television, what is your take on being a gentleman in this modern world?

Being a modern gentleman is everything you have and want to be. The modern man should be more comfortable with his emotions, speak about his struggles, and hopefully hold space for others in his life. So it’s essential to be more approachable and loving while giving space for how they are physically and mentally within the struggle.

How did your experience working in media shape the philosophy you have in life?

When you start in the media at a young age, you get more insight into how the industry works. It can be tough for people to get their first stepping stone into the media world. But once you’re in the door, you quickly understand how it works. People sometimes need to understand that television is a big business, and ultimately, you don’t win from the fame factor. So you’ve got to work hard to get up the ladder. It’s how I started in local television, progressing into one of these networks, and learning from there takes a lot of focus and a hard-working ethos.

As a multi-hyphenate personality with plenty of businesses to run. How did you find the perfect balance of keeping organised, creative, and motivated?

Well, firstly, you must take care of yourself. We sometimes forget that it’s essential to have a little self-care even though we’re busy in this world. Exercising and hanging out with friends and family helps with that. But also, taking a giant leap of faith in trying new things and challenging yourself to move past your comfort zone is something I am not afraid of – it’s always a thrill to do this because you never know the outcome, and it could be good or bad for you. Truthfully that shouldn’t matter. So it’s just a matter of trying it. 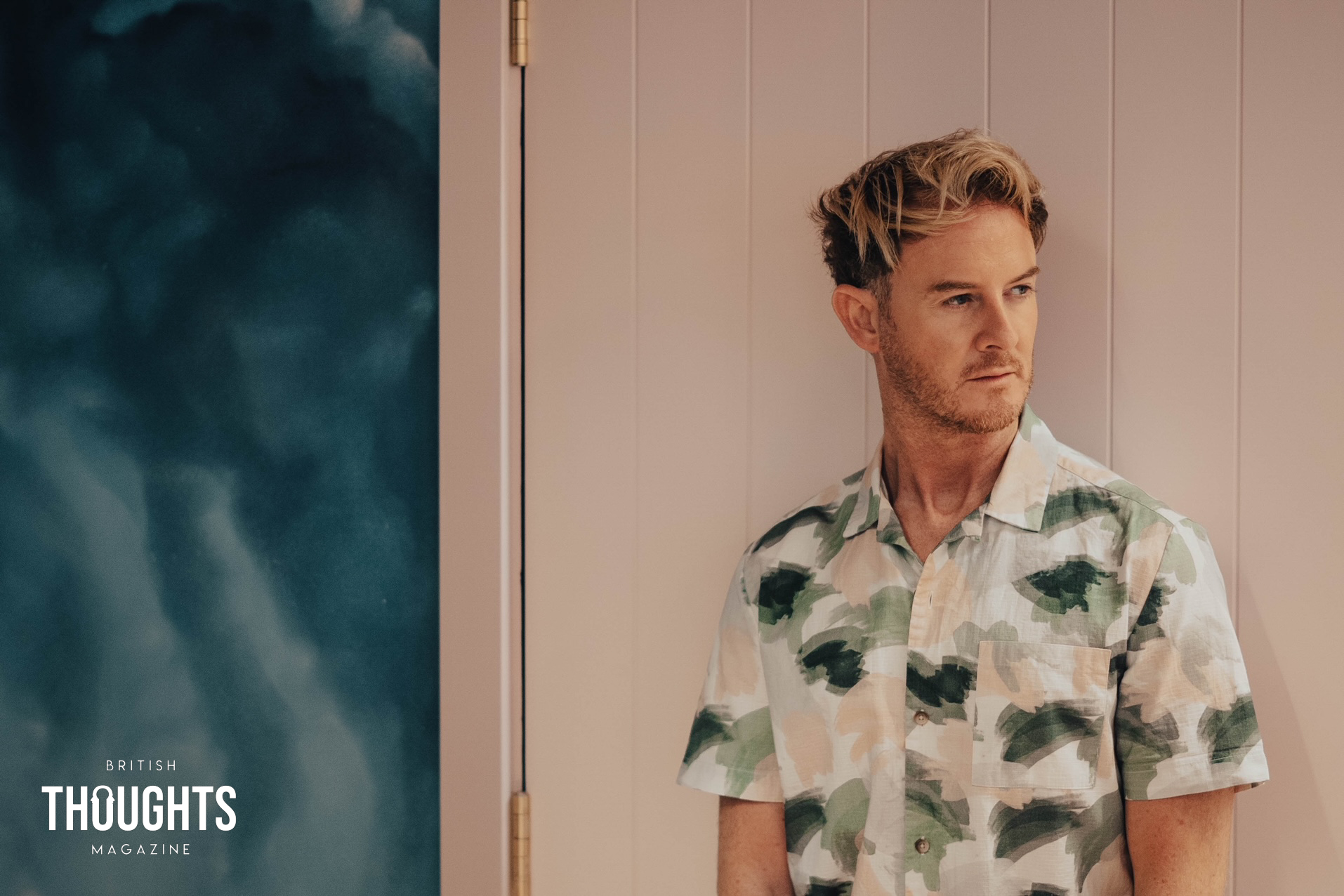 Now, that’s what I wanted to ask you. So you have this show with one of your best friends Martin Compston – Let’s talk about The Scottish Fling and how it all came to be. What were the most memorable memories both of you had on this documentary?

We’re both in our mid-30s, So having time away from a busy, hectic life and having six weeks to roam around the country and do many different ventures together was quite unique for two friends to do. It was one of the first things that we loved about it. Secondly, the series is a love letter to our country, and we put our heart and soul into showcasing how magnificent Scotland is. We’re hoping that the show portrayed a modern vision of what that feels like with some of the stories we have on the show by capturing the unknown parts of Scotland that people haven’t seen on camera before.

Whose idea was it to call the show, The Scottish Fling?

The name comes from our national dance – it’s what Highland dancers are known to do. In my youth, I was a champion dancer. I felt connected to the memory of having a bit of a laugh with friends after practice. With all those things being said, Martin is very proud to be Scottish, and it was essential to come back and have that Scots branding on the front. It’s funny because people think it’s a dating show for Scots. “I remember saying, no, it’s a travel documentary, a fling around the country and going to different places of Scotland that people may not know from general knowledge.

What was the craziest thing that happened during that entire experience together? There has to be one. But, you know, there were a lot of crazy things. But one of the strangest things that happened to us was that we met an artist in the Western Isles. And she created masks hence from sheep. So I’m just interviewing her, and as she was doing that, we had to wear these masks made of sheep– which was quite weird and fascinating.

One other thing we did that was quite interesting was we went again to the west and spent time with a guy called Heribdean baker, a TIK TOK cooking sensation. We were making traditional Scottish food.

What are your thoughts on toxic masculinity? Especially in the media world, there are a lot of expectations about what you should be like on camera or everyone’s watching you, and how do you deal with that?

It’s crucial to show that vulnerability is not a sign of weakness. It shows strength in character. Especially when you have conversations with the lads over a pint, that conversation needs to happen openly. This should happen in modern society. It’s also my opinion, and we should be comfortable saying, I like you, I love you. It shows that we have a connection and are comfortable opening our souls to each other and about having to find that space in our minds. 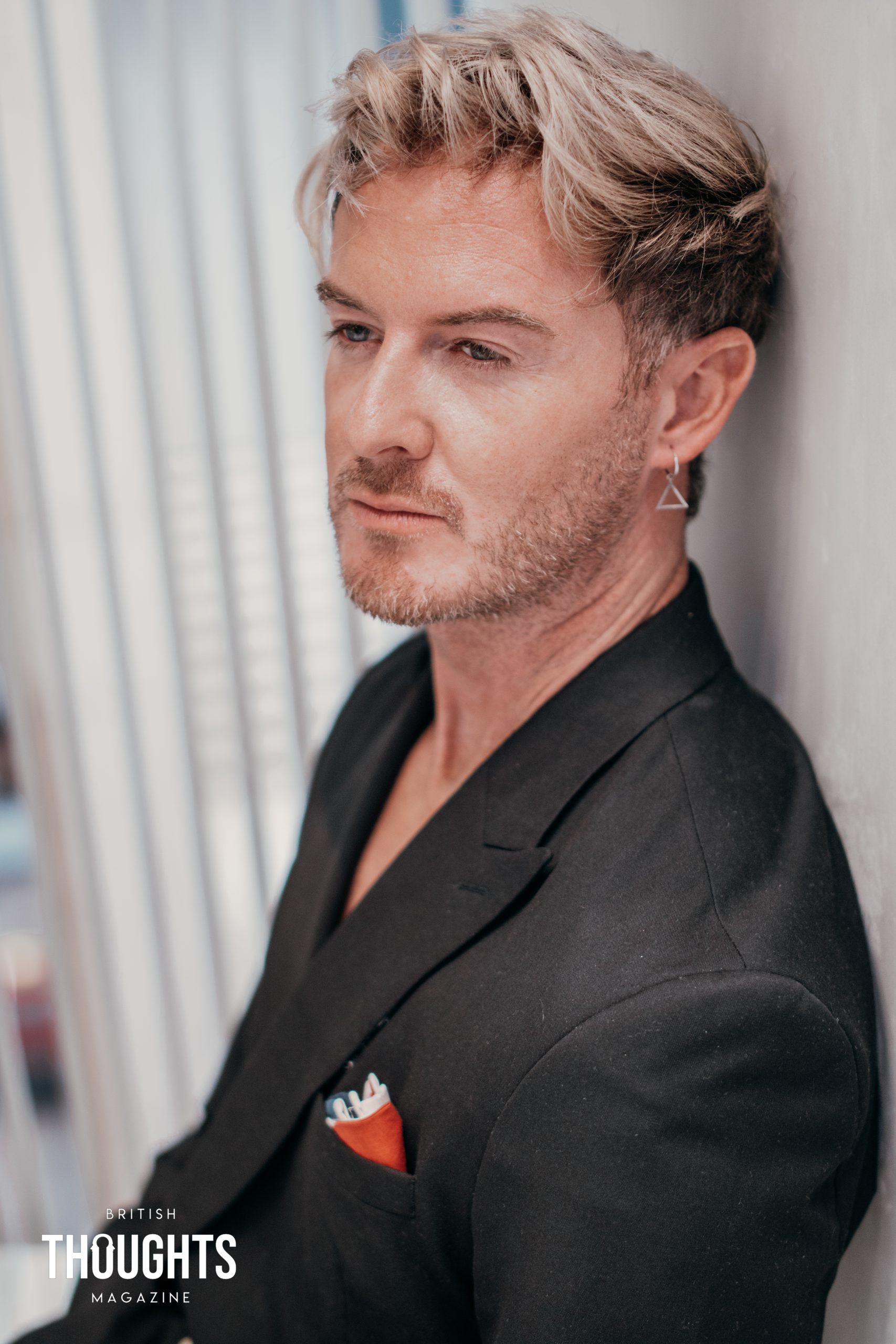 There are a lot of personalities, such as Justin Baldoni, who talk about embracing the emotional element of masculinity. Since you also have this massive platform, how do you set an example for the younger generation with your two cents for them to be modern and mature gentlemen in this ever-changing world?

It isn’t easy because you can’t tell young people what they can or cannot do in life. They develop themselves in their own time. When I was growing up, I made mistakes along the way, as everyone else did, and this by itself is not restricted to just one gender. It’s about learning and changing things as we go. It’s important that we face our struggles head-on and get over to the other side.

Social media does play an integral part in what we learn from others and are inspired by them. Since we’re talking about finding struggles and stuff, there are a lot of podcasts out there that people can listen to, which can be helpful, especially to those that don’t have that kind of network.

Now, my last question to you is, after the show and everything, do you have any compare projects down the line that you want all your friends to know?

We’re looking out for season two, and I’m looking to tackle more projects that enhance and develop my creativity.

For more on Phil and The Scottish Fling:

– INTERVIEW: Martin Compston and Phil MacHugh discuss their tour of Scotland
– Hot Picks: Martin Compston’s Scottish Fling
– US is fabulous – but there’s no place like home… says Line Of Duty’s MARTIN COMPSTON, as he falls back in love with Scotland’s dramatic landscapes on a 1,000-mile TV road trip